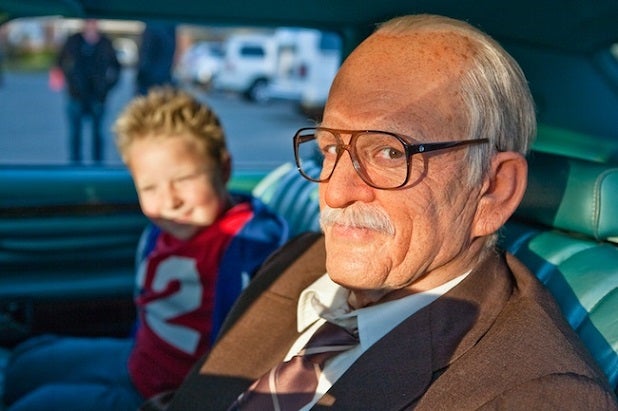 There have been snickers and arched eyebrows over the Oscar nomination handed to Jackass’s “Bad Grandpa” for best makeup and hairstyling, but few films faced — and bested — the challenges that were presented to lead artist Stephen Prouty and his team of merry prankster-enablers.

Like, for example, crafting very realistic swinging old guy testicles and a rubberized penis for star Johnny Knoxville to wear as he galavanted around as an 86-year-old misanthrope.

“Those were both made of silicone,” Prouty explained to TheWrap. “The penis that gets stuck in a vending machine was silicone that had reinforcements built into it so we could stretch the heck out of it without tearing. And the testicles were a very highly plasticized silicone that had weights at the bottom of it, so it had the ability to have a pendulous effect.”

The trick was that the faux-genitals had to not only be believable to the viewer, they also had to fool — and freak out — people in real life, who didn’t realize that the old guy with the scrotum down to his knees was in fact Knoxville in old-age makeup. So, a big part of making them authentic was taking designs from pre-existing molds.

The same went for the rest of the makeup designs, especially Knoxville’s face prosthetics.

“When we were working at Alterian [the original “Jackass” makeup company], doing some Photoshop comps and sculptural ideas, we had tried overlaying some different hair styles and maybe some features from different old people that we had pulled pictures off the net, or maybe some old actors, we tried doing some overlays that way, and we had some neat results,” Prouty said. “But ultimately once we started sculpting his features in clay is when the character started to come to life, and changed even from anything we had decided on in photographs.”

The makeup took almost three hours to apply each day, and given the guerrilla nature of the film — basically, Knoxville plays a dirty old man on an endless hunt for sex, while also chaperoning his grandson across the country — it was crucial that there be not even the slightest indication that the stuff was fake.

“Heat is the enemy, because sweat will loosen things on an actor’s face, and no matter how well you glue down a prosthetic, if sweat gets underneath it, you’re kind of boned,” he said. “We used a couple of products on Johnny, a material called Sweat Stop, which is actually a topical antiperspirant for your skin. We would airbrush a layer of that on his face before we started the makeup, and we used a specific glue-down protocol that enabled us to leave channels open for sweat to drain out, as well.”

The important thing that gets stressed over and over is how essential it was that the makeup not only seem real to viewers, but that it also totally fooled the people that the crew was punking in real life, during production. Because of that crucial requirement, it was not an option to ignore problems and say you’d fix them in post production, and there was no chance at all that they could use computer graphics to make Knoxville look like an old man.

In that sense, “Bad Grandpa” represents a more old school approach to makeup effects in a time of massive industry upheaval. More and more, studios are relying on cheaper computer graphics to create special visual effects, especially when it comes to creating monsters and creatures; think of the latest “Planet of the Apes” movies versus all the preceding volumes.

“Back in the ‘Buffy’ and ‘Angel’ days, the ‘Star Trek’ television series days, everyone in town was working on these shows and making little monsters and aliens every week, and you don’t see that much anymore. CG has definitely taken a big chunk of it,” Prouty said. “Back in the 80’s and 90’s, there were a lot of effects shops around town, and everybody was fairly busy. There was a lot of television and feature work that had creature suits and monsters and zombies.

“Now you’ve got a couple big signature shops in town, and a lot of the smaller ones dissolved or turned into what we called garage shops, which is basically people working out of their homes a lot of times and building their stuff at home,” he continued. “You don’t have as many shops as you did, for sure, and it definitely seems much more competitive, because there’s such a smaller number of projects that are requesting that type of work.”

Luckily, Prouty, who has worked on many a “creature” feature and TV series, has the aging makeup skills that are still in demand around Hollywood. And, despite the media chiding that his nomination received when it was announced, he is also proud of having the backing of his colleagues in the sector.

“Everybody is going to have some opinion on it, and the naysayers, I obviously disagree with them, but they’re welcome to say whatever they want,” he said. “I think people have trouble separating the fact that we’re up for makeup and hairstyling. Granted, I love the film, I think it’s great and funny, but they can’t seem to wrap around their heads that this is a specific category from that film. But hey, that’s cool if that’s how they want to play it, but I’ve gotten a lot of really good positive feedback, and one good example is the fact that we’re in the final three as a result of being voted in by our peer group in the Academy, the makeup and hairstyling branch. So obviously these are people who look at it from strictly a makeup and hairstyling perspective, and said this is worthy of attention.”