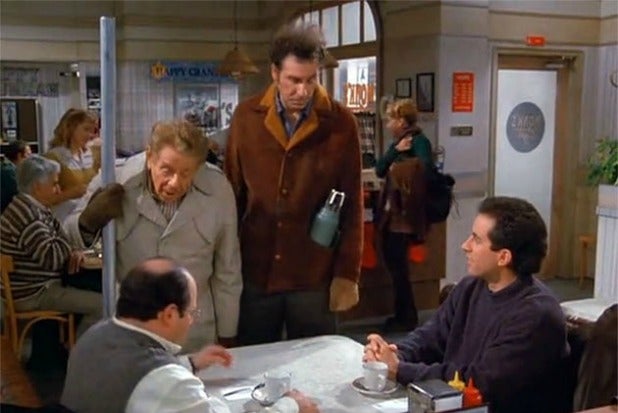 The “Seinfeld” writer who brought Festivus to the world is baffled by Gretchen Carlson’s “outrage” over a Festivus pole going up at the Florida Capitol.

“Am I to understand that some humanoid expressed outrage that the baby Jesus was behind a pole made of beer cans?” Dan O’Keefe asked Mother Jones, which reached out to him for comment about the latest salvo in the network’s perceived “War on Christmas.”

The outrage began when an atheist erected a 6-foot Festivus pole made of Pabst beer cans to protest a privately funded nativity scene on public grounds at the capitol.

“I am so outraged by this,” Carlson said during a three-on-one Fox News debate Tuesday in which she, a rabbi and a Catholic laid into an atheist arguing for the separation of church and state.

“Why do I have to drive around with my kids to look for nativity scenes and be like, ‘Oh, yeah, kids, look. There’s Baby Jesus behind the Festivus pole made out of beer cans!” she said.

Festivus entered the public imagination with a 1997 “Seinfeld” episode co-written by Dan O’Keefe, whose father created Festivus. The tradition involved “weird decorations around our house and weird French ’60s music playing.” He and two co-writers created other Festivus traditions, including the pole.

“Both displays have equal right to be there,” O’Keefe said of the pole and nativity scene. “But, you know, the Fox News outrage machine kicked into high gear, and I’m sure there were some hair-sprayed talking heads bobbing up and down, being outraged about it.”

Jon Stewart: Fox News Lives ‘In a World of Pure Fear and Despair’

O’Keefe is a self-described progressive, and gave $100,000 in 2004 to a group formed in response to the anti-John Kerry group Swift Boat Veterans for Truth. But he isn’t a huge fan of Festivus.

“Look, I’m looking at a Christmas tree right now, and no pole made of beer cans is going to come into my house and knock it down, at least that I’m aware of,” he said. “I don’t think it has the Mordor-like, sinister political significance that’s being attributed to it by right-wing talking heads…It’s a manufactured news event. The intention of the newscast is to feed the false War on Christmas narrative that is everywhere.”

Festivus only made it onto the show because one of his brothers mentioned it to someone else on the “Seinfeld” staff, who liked the idea.

“I didn’t pitch it. I fought against it,” O’Keefe says. “I thought it would be embarrassing and drag the show down, but… Jerry liked it.”

“I was honestly surprised anyone gave a flying f—,” he added. “For better or worse, this is the most recognizable thing I’ve ever done on TV…which is to say my career peaked at age 26, maybe…But I am honored to have this wart on a very lovely pair of buttocks in the pop-culture spectrum.”

And now, children, gather around the pole to hear the story of Festivus: