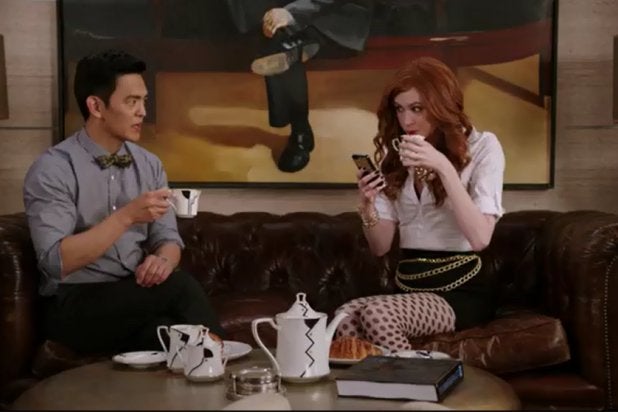 ABC definitely nailed its modern take on “My Fair Lady” by creating a social media-obsessed version of Eliza Doolittle — assuming the goal was to make her immediately unlikable both to her fellow actors and to the audience at large. Saddling “Selfie” with an equally terrible name ensures it will have an uphill battle to even get people to tune in, much less stick around.

Add it to the growing list of ABC’s other offensive-to-women show titles like “Cougar Town” and “Trophy Wife.” Both of those shows struggled to overcome their monikers, with the former eking out a small but loyal following on TBS, while the latter was cancelled earlier this year after one creatively strong season.

Even worse for this latest entry, “Selfie” as a title is both offensive and annoying at the same time, as it calls to mind the absolute worst of the modern social media obsessed culture.

“Doctor Who” star Karen Gillan nails the character of Eliza Dooley in that she immediately made me want to reach through my screen and throttle her. She is obsessed with selfies, social media and all the trappings of online fame to the point that she has no real connections with anyone she interacts with personally.

Here’s the rub, though. By the end of its premiere, “Selfie” became a watchable show with actual potential. I’m just not sure most people will be able to hang in there that long to see it unfold. If they aren’t absolutely appalled by Eliza, they may well be nearly as annoyed by John Cho‘s super-stiff Henry Higgs.

It’s easier to root for Henry, because we see that he is a genuinely kind and decent guy, even if he is quick to pass judgment and arrogant. But then there’s Eliza. We’re told she’s the best sales rep at her company, but what does that mean to viewers? What are they going to latch onto in her to make them want to root for her to figure out how to be a decent human being.

It doesn’t help that we’re served a double helping of Eliza’s narcissistic boorishness. Not only do we get to see and hear Eliza being horrible on-screen, but we’re “treated” to her narration in a voice-over every bit as awful. Again, these things improve by the end of the episode, but it feels much longer than 22 minutes.

The only attempt at making her sympathetic is to tell us that she was “butt ugly” back in school, which is why she became so image-obsessed in her young adulthood. But it’s hard to imagine someone who was socially outcast in school becoming so insensitive as an adult that they would genuinely have no idea how to be kind to others.

One of the first steps in Henry’s program to try and “rebrand” Eliza was to have her actually talk to the company’s receptionist Charmonique, played by the delightful Da’Vine Joy Randolph. Eliza has a tendency to talk AT people rather than to them. She doesn’t engage, but rather downloads all of her information into their faces and then goes on with her day.

It’s an awkward encounter when she’s forced to engage with Charmonique, but one made stronger by Randolph’s performance. At this point in the show’s journey, Charmonique is the most enjoyable part of the show, though admittedly she is one of only three characters to have been given any depth at all thus far.

We were introduced to Eliza’s neighbor Bryn (Allyn Rachel), but aside from an awkward make-under musical number, there’s not much to her just yet. She seems destined to ultimately become friends with the new-and-improved Eliza, just as it’s painfully clear that Eliza and Henry will wind up together; this show is about a subtle as Eliza.

That pairing isn’t necessarily a bad thing, as Cho and Gillan have truly great chemistry together. Even through the awkward characters they’re portraying, there’s something genuine and palpable about the moments they share. They have good comedic timing, and even shared a believable moment of honest vulnerability in the pilot’s closing moments.

It was those closing moments that earned the show a second shot from me, as it gave me a glimpse of what this show could do, and how much more tolerable Eliza can become as she softens her edges. At the same time, it promises to be riddled with romantic comedy cliches, and those run the risk of getting old very fast.

Also read: ‘Family Guy’-‘Simpsons’ Crossover Is Everything Fans of Both Shows Love

Then again, romantic comedies are a huge business, despite the overwhelming similarities between almost every film representation in the genre. In this season of romantic comedy — probably inspired by the departure of “How I Met Your Mother” — “Selfie” is a sold installment. It just takes a while to get there.

I’m also not completely sold on some of the more unusual lines of dialogue, like Henry randomly rhyming a list of wardrobe requirements to Eliza before they attend an event together, or telling her “You’re getting it, but you are in fact missing it,” when she takes out her phone to record the rain. I get that it’s supposed to be kind of sweet, but people don’t talk like that and it takes you out of the narrative.

This is definitely one of those shows that would have benefited from back-to-back episodes, so we could have a chance to see what it can be beyond the pilot. Comedy pilots are always awkward, and especially if they’re having to establish a concept along with a new cast of characters. It’s not until the second episode that things start to settle into the groove that the network hopes can sustain an audience for years.

For now, the jury is out on “Selfie,” but I’m cautiously optimistic that there is a very entertaining show lurking beneath its shallow and annoying surface.