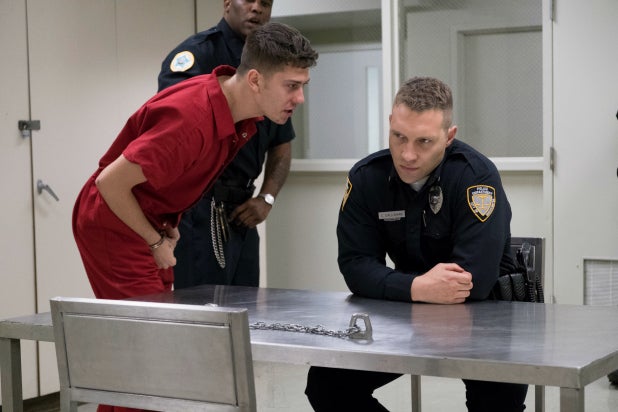 The film takes events which should be riveting and makes them stalwart, pushing the biggest emotions and most complicated thoughts into too-short scenes that feel isolated from the rest of the movie. A documentary about these characters’ therapy sessions would be fascinating. The movie about how they got there? Not so much.

“Semper Fi” stars Jai Courtney as Callahan, a police officer and Marine Reservist, whose brother Oyster (Nat Wolff, “The Kill Team”) has always been a bit of screw up. Callahan had to call in favors to get the Marines to waive Oyster’s prior felonies so he could join the service. Callahan had to get Oyster his job at a burger joint. Oyster knows all this and, although he appreciates it, he resents that his brother looks at him like a pitiable charity case instead of as a brother.

Callahan, Oyster and the rest of their squad get called to serve in Iraq, but while they’re out drinking, Oyster has the worst possible luck: He gets in a fight with two young men, and one of them falls and hits his head on a urinal and dies. Worse, it happens right after Oyster told another barfly that “I’m going to kill him” just because they were flirting with the same young lady. Apparently euphemisms and inflection don’t exist in the legal system, because that turn of phrase lands Oyster in jail.

Callahan does his tour of duty — during which one of Callahan’s best friends is maimed, and in which Callahan murders a man who may or, just as likely, may not have been responsible — and when he gets home, he finds out his brother is now serving 25 years in prison. Oyster refuses to talk to him, even about the bruises he has all over his body. And when Callahan does finally sneak into a visitation, on the heels of somebody else, Oyster lays the biggest guilt trip on him ever.

It takes a while to get there, but the scenes where Courtney and Wolff lay into each other are the most captivating moments in “Semper Fi.” Callahan might be a somewhat nice guy, but he’s not exactly emotionally available, and he’s spent the majority of the film (and his life) convinced of his own moral and familial superiority. It’s only when he’s confronted with Oyster’s misery, and only when Oyster lays out — with brutal and painful clarity — just how culpable Callahan is in this tragedy, that Courtney is allowed to give his character the kind of rich, emotional turmoil that could make a melodrama like this feel satisfyingly melodramatic.

Meanwhile, Wolff — not unlike his equally talented brother, “Hereditary” star Alex Wolff — proves to be magnetically vulnerable. Wolff doesn’t feel like he’s reaching for cheap emotional shots, even when the character he’s playing is. There isn’t a dishonest beat in Wolff’s performance. It’s a pity that he leaves the movie for practically half the running time.

“Semper Fi” continues, Oyster gets stuck in solitary, and Callahan decides to do something to fix the situation. But everything is too damn broken. The legal system is impermeable, and his one foray into corruption and violence immediately backfires. There’s only one thing left to do. So why does it seem so damnably bland?

There’s not a lot of story in “Semper Fi.” It’s a simple drama with big beats and a whole lot of down time between them. And when this movie is down, it’s all the way down. Plot-wise, the film is a humdrum and lackadaisical march to a conclusion so inevitable that one begins to wonder what the point was of stretching this tale out to feature length. It would be easy to fault editors Kevin Tent (“The Peanut Butter Falcon”) and Kyle Valenta for the film’s frustrating pacing, but unless it was their decision to cut out all the complexity, it’s probably the fault of the screenplay (by Rubin and Sean Mullin, “Amira & Sam”).

“Semper Fi” may be a straightforward story, but it raises fascinating questions that plague its heroes. The bizarre morality of sending someone to prison for 25 years for a crime that’s less horrific that what his brother allowed to do as a marine is brought up, briefly, then never seriously examined. The responsibility that family members have for each other is challenged by unexpected revelations, but then we see no follow-through.

The whole movie could have been Jai Courtney and Nat Wolff yelling at each other across a table, and it would have been blissfully dramatic: “My Prison Visit with Andre.” Watching them walk away, either off camera altogether or into a plot that refuses to let them talk about their fascinating feelings, is annoying. Henry Alex Rubin’s movie didn’t have to feel this turgid.

Even the supporting cast gets stuck in minor, barely noticeable roles: Leighton Meester is in “Semper Fi,” and it’s nearly impossible to understand why, since her character has almost nothing to do. She’s shoehorned into a criminality subplot, but she quickly explains she’s not an expert in what Callahan thinks she’s an expert about, so that doesn’t work. She’s got a relationship with a soldier played by Finn Witrock that takes all the “fun” out of “perfunctory.”

One might think she was there to provide a counterpoint to the film’s macho protagonists, but other than saying she thinks the Iraq War is stupid, briefly, at the beginning of the film, she doesn’t get to talk much. She gets to do hardly anything. She’s mostly just there.

And so, frankly, is “Semper Fi.” It’s just kinda there. It gets through its storyline and makes its underscrutinized points about fidelity — it’s right there in a title — and then it’s over, and the only thing we have to show for it is a missed opportunity to let these characters reveal their inner selves for more than three minutes. Then maybe we’d care more about what happens to them, and less about how much longer we’ve got until the credits roll.