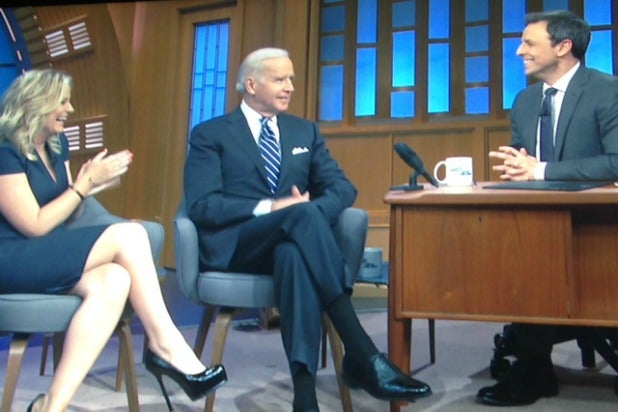 Seth Meyers started his first episode of “Late Night” borrowing a routine from Jimmy Fallon, and didn’t try to break the mold from there. But his approach worked, because he’s such a master craftsman and deliverer of jokes.

Other late night shows, from Jimmy Fallon’s “Tonight Show” to “Jimmy Kimmel Live” seem built for the internet as much as television, jousting to create the next morning’s viral video. In his debut, Meyers just went for a solid, well-constructed TV show – and delivered. Maybe he’ll branch out and get weirder as the show goes on. Having Fred Armisen as his bandleader will help. But for now, he comes off as funny and capable, but never desperate to please.

Also read: Seth Meyers on ‘Late Night’ vs. ‘SNL': ‘Craziest Thing Is Just Having to Be on Camera More’

The former “Saturday Night Live” head writer began with a quick tribute to Fallon, his former castmate, by imitating his “Thank You Notes” segment. He thanked Fallon for moving on to “The Tonight Show” so that he could take Fallon’s job. Then he self-deprecatingly promised to use the show only for “completely original comedy pieces” – as soon as the current one was over.

Meyers didn’t milk it a second too long. After a frenetic opening written by Armisen, another “SNL” alum, Meyers walked out to deliver his writing team’s unflashy but exceptionally well-made jokes.

“I’m gonna shake stuff up and open this thing with a monologue,” he said.

They were smart. Almost half were about politics, including this one about a 101-year-old candidate: “He has a good chance of appealing to younger viewers, since that’s all there is.”

He was good at current events, too. His years on “Weekend Update” seem to have turned him into a guy who can open the paper and come up with a one-liner for every headline.

“The brassiere turns 100 years old this week, and so does everybody who still calls it a brassiere,” he said. He noted that an Icelandic museum filled with penises still  needs one from a human: “And only then, will Bjork’s new dress be complete.”

Meyers doesn’t seem prone to dumbing his humor down: His first bit was about Venn diagrams. But he could also be breezily likeable, as when he told a story about a man in a diner changing the tire of his and his wife’s car, while Meyers held their small, shivering greyhound.

“It’s very hard to feel macho when you’re holding a tiny dog while another man changes your wife’s tire,” he said.

On his first night, Meyers didn’t have the giddy excitement of Fallon, the smirky pranksterism of Jimmy Kimmel, or the deliberate goofiness of Conan O’Brien. He felt almost like a pre-David Letterman talk show host, going for straightforward jokes over irony and stunts. Even his set is low-key, almost soothing, full of metallic blues.

One surprise strength: He’s very good with guests. It helped that his first was Amy Poehler – yet another “SNL” colleague, and one of his best friends. But he was even better with Vice President Joe Biden, who had an easy rapport with Poehler after guesting on her show, “Parks & Recreation.” (The three are pictured on a screen in the NBC commissary, where the show was screened for press.)

Biden, a likely 2016 presidential contender, joked that he was “planning a major announcement tonight – but I decided tonight was your night.”

Meyers then asked Poehler about her 2016 plans.

“I’m running for president,” she said.

She did have a real announcement: “Broad City,” the Comedy Central show she executive produces, will return for a second season.

She also talked about hosting a Golden Globe party, where Joaquin Phoenix was an exceptionally hard-to-read first guest. She said she wanted to set the same tone as Meyers’ first guest: “a very talented and strange tone.”

Meyers is full of talent, but the strangest thing about him is how normal he seems.