Seth Meyers took several digs at former Trump adviser Kellyanne Conway on Monday night over the news that she is releasing a book about her time in the White House.

“Yet another former Trump adviser is out with a self-serving book about their time in the White House,” Meyers said during his A Closer Look segment on “Late Night with Seth Meyers,” which you can watch above.

“There have been a flood of books from former Trump advisers since he left office, and while most of them have been dishonest and self-serving, there’s one coming out soon that I think has the potential to be refreshingly candid and revealing. And — oh wait, nevermind. It’s Kellyanne Conway,” he continued. 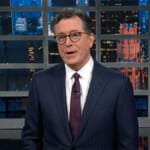 Meyers also questioned the legitimacy of Conway’s book, considering she is well known for using the phrase “alternative facts” to once defend former White House Press Secretary Sean Spicer’s untrue statement about the number of people that attended Trump’s inauguration.

“Sorry, but the person who coined the phrase ‘alternative facts’ does not get to cash in on a book given that there’s not a single word of it we should believe,” Meyers said. “I bet even the cover is a lie. By Kellyanne Conway? That probably means her real name is something like Connie Anne Kellyway. This book is also called ‘Here’s the Deal,’ which should be an automatic red flag, because usually when someone says those words, they’ve been caught in a lie.”

In Meyer’s opinion, there’s “really only one thing Kellyanne Conway should be remembered for: her snide response to a question about COVID being contained in March of 2020.”

The late night host then rolled a clip from inside the White House briefing room, where a reporter asked Conway why the Trump administration hadn’t sent out more tests and helped prepare hospitals while COVID was supposedly “contained. 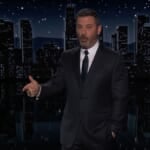 Meyers concluded with: “Congrats Kellyanne, you were right. It was contained in March 2020 and COVID quickly fizzled out. Hydroxychloroquine and horse paste worked, and we never heard of it again.”