Stephen Colbert decided to poke fun at the overall mood in the U.S., which has been impacted by many things including inflation and political conflict between the parties.

On Monday’s show, “The Late Show” host opened his monologue by quoting a recent poll about how Americans are feeling about the future.

“Current events have me a little unsettled. A little flurpy about America’s future,” he said suggesting it was giving him an upset stomach.

He continued: “I’m not alone because according to a new [poll] … America’s mood is uneasy and worried. Things are so stressful, America’s bird is now the balding eagle.”

Colbert then cut to a photoshop picture of an eagle sporting a shiny dome. 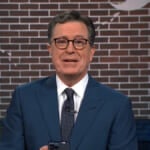 He then turned to quip about the current president’s age.

“According to the polls, 74% of Americans say things in America are going badly and 65% of Americans say when important things come up, Biden is slow to act,” Colbert began. “Well yeah, he’s 79. At his age, if he moves too fast, he’ll get bruised by his shirt.”

“The GOP doesn’t fare well in this poll either, because the Republicans are decribed by a majority as ‘extreme,'” Colbert noted. “[The] GOP responded, ‘This poll is illegitimate. No one feels that way and when we return to power anyone who feels that way will be sorry when we make ‘The Purge’ real.”

Watch Colbert’s entire monologue, where he also tackles the Monkeypox virus, above. 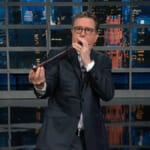