Stephen Colbert returned to “The Late Show” Monday night after a hiatus that began May 9, when he started suffering COVID symptoms again. So, of course he made light of things.

“I am back, baby. COVID. Two times,” he said, referencing his earlier absence in April after catching the virus, and his recent week off. “COVID’s not keeping this guy down more than twice.

“Here’s what happened: Had COVID, got over COVID, then COVID staged a gritty reboot in my lungs, but I’m back and I’m happy to be back,” he added, telling his audience and the band he missed them all.

As he caught up on current events in his monologue, he addressed several topics, but one of them seemed to capture his attention more than all the others — the Ukrainian band that won the Eurovision Song Contest over the weekend, and in particular an instrument they used on stage. 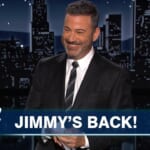 Also Read:
Jimmy Kimmel Says Colbert ‘Sent Soup,’ but ‘Seth Meyers, Not a Peep’ When He Had COVID (Video)

“Over the weekend, Ukraine won the Eurovision song contest,” he said to cheers from the studio audience. “Yeah. Slava. Slava Ukraine, which I believe means ‘Suck it Putin,’ because Russian was banned from Eurovision.”

Colbert went on to play a clip from Ukraine’s Kalush Orchestra, the winning act in the competition.

“That is my favorite kind of … I want to say, folk-rap-EDM-flute-based-Hobbit rock,” he joked of the band’s sound. “I was so inspired that today I sent some people out to buy that yard-long one-hitter that the guy was working at the mic, which I now know is called it’s called a Telenka. That’s a hot sound. Louis, play me in.”

At that point, Colbert attempted to play the long flute and jam, but failing miserably to make it sound pretty. He continued to play the instrument — badly — throughout Monday’s monologue, which you can watch in the video above.

Before he left the topic of Eurovision to focus on the baby formula shortage in the U.S., he noted Ukraine’s Kalush Orchestra really upped the stakes for grown-up children who don’t keep in regular touch with their parents. 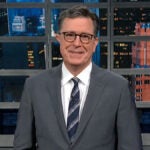 “The winning song was called ‘Stefania’ and was written about the frontman’s mother, really raising the bar for children everywhere,” he said, before donning a mother-like voice. “‘Those nice boys from Ukraine did a whole award-winning song about their mom — in the middle of a war. You won’t even reply to my emails. I sent you 10 Minions memes. I haven’t gotten so much as an ‘LOL.'”

Watch Colbert’s full monologue at the top of this page.