Seth Meyers used his “Closer Look” segment on Wednesday night to call out Republicans, and their response to calls for gun control nationwide. But he didn’t focus on the lack of legislation itself; he homed in on how the GOP has effectively rewritten the Second Amendment to avoid it altogether.

“Entrenched powerful forces have perpetrated a monumental, decades-long fraud in convincing large numbers of people that it is their constitutional right to own arsenals and military grade weaponry,” Meyers said. “And they’ve invested large sums in convincing people that that made up right — a right five Republican justices essentially invented out of whole cloth not that long ago — is constantly under threat.”

Meyers then pointed out that the idea of the Second Amendment being a “fraud” is not his own. It was actually that of conservative former Supreme Court Justice Warren Burger. To back him up, Meyers pulled up a clip of Burger saying just that.

“This has been the subject of one of the greatest pieces of fraud — I repeat the word fraud — on the American public by special interest groups that I have ever seen in my lifetime,” Burger said in 1991. “Now just look at those words, there are only three lines to that amendment. A well regulated militia. If the militia, which was going to be the state army, was going to be well regulated, why shouldn’t 16 and 17 and 18 or any other age persons be regulated in the use of arms?” 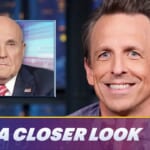 Also Read:
Seth Meyers Digs Into Kellyanne Conway Over White House Tell-All: ‘I Bet Even the Cover Is a Lie’ (Video)

To that, Meyers wholeheartedly agreed. But then, he dug in on just how that “fraud” was perpetrated, citing a report that was released in the 80s. According to The New Yorker, that report claimed that Republicans had found “clear — and long lost — proof that the Second Amendment was intended as an individual right of the American citizen to keep and carry arms.”

“It is absolutely insane that Republicans claim to have found long-lost proof that changed the meaning of a document written in 1787, in 1982, which means — definitely means — one of them had just seen ‘Raiders of the Lost Ark’ and then said ‘You know, sometimes people find old s—, I’m just saying!'” Meyers joked.

He then mocked it further, wondering, “I mean, how’d it go down? Did Nicolas Cage find a secret Post-It note hidden inside the Liberty Bell? We were so focused on the crack we never looked inside!”

Speaking more seriously, Meyers marveled at the logic behind it, later calling it “obvious bulls—.”

“That should give you an idea of how preposterous and unhinged this whole idea is,” he continued. “The side that claims to care about the plain language of the Constitution and the original meaning of the founding fathers had to pretend to unearth some secret hidden proof that the Second Amendment actually means something completely different from what it obviously says, which is totally divorced from how other sane countries deal with these kinds of horrors.” 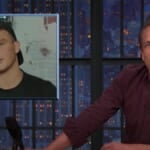 You can watch the full “Closer Look” segment in the video here and above.