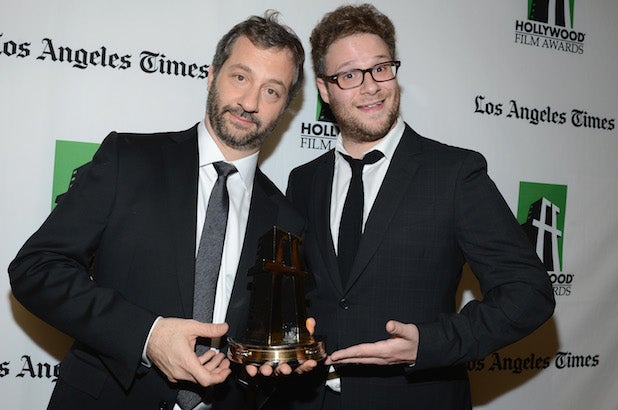 For years, many cultural critics have blamed ubiquitous and extreme depictions (and the glorification) of violence in media for the rising number of mass shootings in America. But are frat boy comedies about goofy man-children also responsible for a culture of rage and murder?

That’s the case being made by Washington Post film critic Ann Hornaday, who wrote on Sunday that suspected UCSB/Isla Vista killer Elliot Rodger,  who went on a rampage after writing an intense 140-page manifesto and recording YouTube videos lamenting his ability to interest women, was influenced by the works of Seth Rogen and Judd Apatow.

“How many students watch outsized frat-boy fantasies like ‘Neighbors’ and feel, as Rodger did, unjustly shut out of college life that should be full of ‘sex and fun and pleasure?'” Hornaday asked, rhetorically. “How many men, raised on a steady diet of Judd Apatow comedies in which the shlubby arrested adolescent always gets the girl, find that those happy endings constantly elude them and conclude, ‘It’s not fair?'”

The problem with posting such opinions on the internet — no matter how valid or invalid — is that the internet is a two-way communication tool, which makes it especially risky when the person you’re calling out is way more famous than you.

.@AnnHornaday I find your article horribly insulting and misinformed.

.@AnnHornaday how dare you imply that me getting girls in movies caused a lunatic to go on a rampage. — Seth Rogen (@Sethrogen) May 26, 2014

Apatow got in on the action, too, though with a more world-weary cynicism befitting his years and the criticisms he’s faced over the years. He has become a media critic, as well.

“@melissa5001: @Sethrogen @marshallsheldon @AnnHornaday why is it always everything but mental illness?” Because that doesn’t sell papers. — Judd Apatow (@JuddApatow) May 27, 2014

Remember everyone – ads next to articles generate money. They say something shocking and uninformed & get you to click on it to profit.

Most of Earth can’t find a mate– someone to love. People who commit murder of numerous people have mental health issues of some type.

Here is how it all works. Anne says something thoughtless. I say it is wrong then CNN asks everyone to debate and it becomes TV.

I said no. I wonder if Anne can prevent herself from going on and becoming part of how these tragic events become profit centers for media

Undoubtedly, these killings — and many others — are a result of a toxic cocktail of mental illness and many intertwining cultural factors, perhaps including entertainment. Sadly, tragedies soon become projection screens for many interest groups and opinions, and the Rodger case is no different.