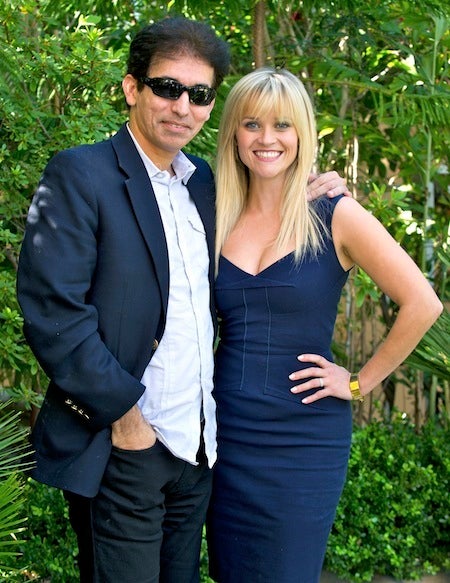 The latest scandal at the Hollywood Foreign Press Association involves alleged sexual harassment, naked girls at swimming pools, junkets, cellphone photos and the kind of zaniness that only the Golden Globers can muster.

The Golden Globe voter in question, Sam Asi, denies his involvement and alleges a plot to push him out of the group, but let’s not get ahead of ourselves.

Several individuals recounted to TheWrap that Asi (left, with Reese Witherspoon) apparently showed photos on his cellphone to two women staffers at the association office of drunk, sleeping girls from a recent movie junket “who, it is claimed, he got drunk, brought back to his room, and molested,” according to one of the insiders who recounted the mess to TheWrap.

“Asi is said to have boasted about this when he produced his phone, with the photos, to the two staffers at the HFPA’s offices on Robertson Boulevard, West Hollywood,” the insider said.

The women were not amused. One of them, Nellee Holmes, complained to member Yoram Kahana, who then forwarded the matter to the entire membership. Update: Kahana writes to say that he did not forward the matter to the membership, “I tried to reconcile and bring sam and nellee together, and wrote only to each side separately,  no CC, no BCC to anyone.”

Second update: Asi called to tell TheWrap: ” I have never swum naked anywhere, or exposed myself to anybody. I’ve been raised not to do these things. There are people in the HFPA who are bent on hurting me and trying every method to discredit me. This is not the first time I’ve been accused of something I didn’t do.” (He said he’d been falsely accused of hacking HFPA computers, among other things.)

He also provided an email from one HFPA staffer to the group’s leadership in which she denied being shown cellphone photos or making any sexual allegations, despite “disagreements” with him.

The membership took up the matter at last Tuesday’s board meeting. A decision was taken to take no action – not to inquire further into the allegations, and not to sanction Asi.

Asked about the incident, an HFPA spokeswoman told TheWrap: “This is a personal matter of discourse between two individuals. The HFPA takes such allegations seriously and will be looking into the matter further.”

But according to my insider, this has not satisfied women members of the group, who are pushing for a “meaningful code of conduct” around sexual harassment.

Meanwhile, the junkets are also stirring up discontent among the movie studios, who feel the HFPA members are taking advantage of their largesse.

In Asi’s defense, he did send around an indignant email – again, to all 84 members – of which of course TheWrap obtained a copy.

“The author of the email accuses me of taking drugged women to my place and molesting them,” it reads (though this appears to overstate the allegation). “And while at press junkets at the London Hotel in New York, I wander around naked at the swimming pool (which doesn’t exist).” He went on: “I am asking her again… to repudiate these wicked lies and commit to refrain from repeating them.”

According to the insider: “Many women already found the boys’ club atmosphere of the association distasteful and see the failure to investigate the accusations properly as symptomatic of an internal culture that values keeping the HFPA out of the press as more important than doing the right thing.”

What can I say? Those crazy Golden Globers. They keep us all on our toes.