“She-Hulk: Attorney at Law” smashes its way onto Disney+ with a delightful break from the cutesy family fun and intense heroic introspection of the previous five Marvel live-action series to hit the platform. Instead, Jennifer Walters (Tatiana Maslany) brings light-hearted adult humor to the platform with whimsy and charm. A case-of-the-week series, this show features the bonus of prominent guest cameos from the gargantuan universe Marvel has crafted over the past 12 years. A delight in every sense of the word, head writer Jessica Gao brings something sorely missing from the MCU: a hilarious, grounded, leading woman with very manageable trauma.

Jennifer Walters, the cousin of Hulk, aka Bruce Banner (Mark Ruffalo), is imbued with the powers of the Hulk after an accident. While her cousin struggled for years to come to terms with his alter ego and ultimately the anger that resided in him, Jennifer finds no alter ego living within her mind as her body changes. Even in Hulk form, Jennifer remains herself because she reigned in her anger years ago. She’s a woman in white-collar America; anger issues are not a luxury she can indulge. Instead, she struggles with balancing a personal life, a new work environment and the public’s perception of her body. 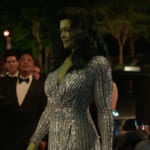 Also Read:
‘She-Hulk’ Team Teases ‘Great Chemistry’ Between Jen Walters and Daredevil: It’s ‘Something That People Are Going to Love’

Maslany flourishes in the role. While some fans critiqued the casting of a more petite actor, the “Orphan Black” alum uses the physical difference between Jennifer and She-Hulk to her advantage. As the statuesque Hulk, she struts powerfully into any scenario, confident she’ll be able to resolve the situation given time. As Jennifer, her confidence is the same, but the men around her react differently. They talk over her, coddle her and belittle her. She’s no shrinking violet – it’s simply their perception.

An adept adaptation of the comic book character, this series elevates everything that makes She-Hulk so much fun to read. Thrilling cameos and laser focus on the depictions of women in the superhero genre, keeping the tone light but impactful without becoming stiff and preachy.

Gao, most famous for penning the “Pickle Rick” episode of “Rick and Morty,” imbues her cutting wit in every scene of the pilot and leads her writers to do the same as the series progresses. This is a legal show, setting a precedent for how villains and heroes will need to interact with the law going forward. Disney and Marvel made it clear with “Doctor Strange and the Multiverse of Madness” that their streaming series are required viewing to follow the continuing MCU storyline, which raises the stakes for “She-Hulk.” Earth, radically changed by the blip, seeks structure in the new world order. She-Hulk brings that with side-splitting humor, glamour and thought-provoking new looks at events almost forgotten for even the biggest MCU fan, illuminating every corner of the Marvel Cinematic Universe and probably encouraging more than one rewatch of films that may seem ancient to some viewers.

As Marvel rounds out Phase 4 of the franchise, many new characters arrive to fill in for the monumental losses of Black Widow, Iron Man and Captain America. But they also needed to expand the super-powered beyond the end-of-the-world catastrophe fighters as fatigue started to set in. Welcome to street-level heroes in the canonical MCU. Marvel’s tangentially connected Netflix shows used to cover this space with Daredevil, Jessica Jones, the Punisher and Iron Fist. And they’re bringing them back in a more Disney manner with new series like “Hawkeye” and now “She-Hulk” as Charlie Cox’s Daredevil makes his Disney+ debut in this new show.

“She-Hulk: Attorney at Law” makes daring leaps into fandom lore that I’m frankly shocked Disney took on. Viewing this series is incredibly rewarding as a long-time fan of the franchise, but it should also be a delight for lovers of “Law and Order,” “Ally McBeal” or “Suits.” There’s a complete understanding of what makes these shows so thrilling. It’s sexy, thoughtful regarding how the law works and crafts affectionate chemistry between Jennifer and her colleagues, romantic interests and family. In short, “She-Hulk” is an absolute must-see. 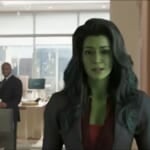