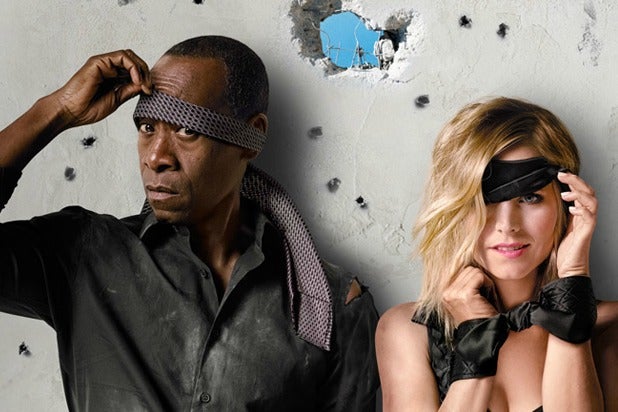 Art may have imitated life a little too closely during Sunday’s violent episode of Showtime’s “House of Lies,” when a masked gunman brutally massacred guest star and rapper Tip “T.I.” Harris’ character in a drive-by shooting.

The onscreen murder resembled Tupac’s 1996 killing in Las Vegas, and coincidentally the scene was also filmed on-location just three miles west of the Wilshire and Fairfax intersection where rapper Biggie Smalls was gunned down six months after Tupac, a correlation the producers behind “House of Lies” say they didn’t intend.

Still, the eerie similarities sparked some outcry from viewers on Twitter.

Viewer Alexus DiMatteo tweeted “I really wanna know y they would do a tupac drive by in ‘house of lies’ like r they serious.” Another fan, Staci Harris of Houston, tweeted that the TV slaying “looked way too real” and made her cry.

But David Walpert, one of the executive producers behind “House of Lies” starring Don Cheadle and Kristen Bell, said the death was unintentionally insensitive or offensive and any similarities to Tupac and Biggie’s deaths were purely coincidental.

“I was not totally aware,” Walpert told reporters during a screening of the episode prior to its Sunday airing. “We were thrilled to do it on Rodeo Drive (and Wilshire) not because of any past murders, but it was a great location and so recognizable to anyone who has seen a movie ever.”

Walpert was also not aware that then 24-year-old drug dealer turned rapper Biggie Smalls was killed on Wilshire Blvd. Like Biggie and Tupac, T.I.‘s character Lukas Frye was a former drug dealer.

Though the graphic murder offended some viewers familiar with the real-life slayings — other viewers, such as Reginald Shipman, simply commended it as “good TV.”

What did you think of Lukas’ murder and the connection to Tupac and Biggie? Tell us in the comments below.