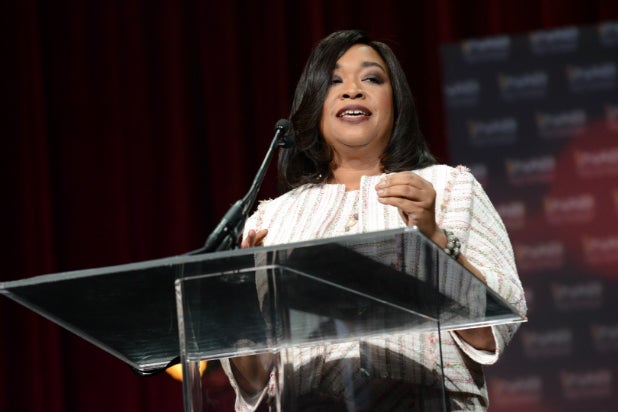 The showrunner of ABC’s entire Thursday primetime programming block received accolades from the National Association of Broadcasters on Monday, at a luncheon that honored diversity by moving the conversation forward from honoring diversity.

“Everyone makes a big deal about how I broke all these barriers in terms of diversity, so I know that I have to talk about it,” Rhimes said in accepting her induction into the NAB Broadcasting Hall of Fame.

In his introduction of the groundbreaking showrunner, NAB President Gordon Smith didn’t once mention Rhimes’ race or gender as qualifiers for her success, as so many commentators so often do. The discussion didn’t dwell on how many black or gay or young or old characters there are in Shondaland shows, because, as Rhimes pointed out, after more than 450 hours of Shondaland programming, these facts are known.

So Rhimes took a few minutes to address — and dismiss — the conversation that has become an increasingly frustrating part of her media presence.

“In Shondaland, our shows look like how the world looks. Everyone can see themselves when they turn on the TV on Thursday nights on ABC,” Rhimes said. “To me that was not some difficult brave special decision I made. It was a human one, because I am a human. It wasn’t something we had to bravely fight for, because ABC is also full of humans.”

“This is not the Jim Crow south,” Rhimes added. “We’re not ignorant, so why wouldn’t we [cast that way]? I still can’t believe I get asked about it all the time, as if being normal, TV looking like the normal world, is an innovation.”

Also Read: ‘Scandal’, ‘Grey’s Anatomy’, ‘How to Get Away with Murder': It’s Shonda Rhimes’ World (Video)

The “Grey’s Anatomy,” “Scandal” and “How to Get Away With Murder” showrunner alluded to recent reporting about the prevalence of minority casting in her remarks, suggesting that media ought to be “embarrassed” to be so backward-looking in covering the television industry.

“You’d think people would be embarrassed — I’d think so — embarrassed to ask the question in the 21st Century,” Rhimes said.

With the 68th episode of “Scandal” currently shooting, “Grey’s” in its 11th season, the 15-episode season of “HTGAWM” recently wrapped and a pilot in production, it’s hard to argue that Rhimes and producing partner Betsy Beers are indeed busy.

But, Rhimes said, she wouldn’t trade any of it.

“It doesn’t matter how many episodes I do or how many shows I create – the wonder is still there,” she said. “I don’t feel jaded; there isn’t any cynicism. I love working in television.”

Rhimes pointed to the communal feeling her shows provide — most viewers watch ABC’s #TGIT programming block live and interact on social media — as reassurance that her stories are hitting the mark.

“I’m proud of the fact that what I most love about TV, the shared camaraderie of laughing with the person next to you on a sofa, the community of fans all leaning forward at once, the the metaphorical gathering around the campfire to hear a story is still happening,” Rhimes said.

When those shows touch on normally taboo issues like rape, abortion, HIV/AIDS and police shootings, Rhimes said, it’s all the more important for viewers to watch together and participate in the national conversation. TV, she said, gives us all a means to do that, which we otherwise might not have.