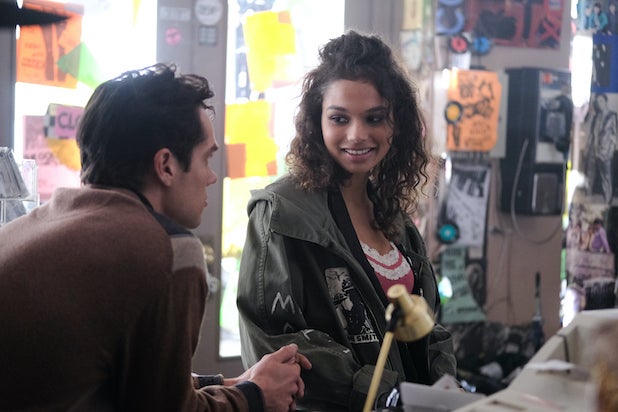 Director Stephen Kijak has made a string of documentaries that are focused on music, among them “We Are X,” “Jaco,” “Stones in Exile,” “Scott Walker: 30 Century Man” and “Sid & Judy.” That ought to mean that he’s got an understanding of the musical life – but more to the point for his new narrative film, “Shoplifters of the World,” it should mean that he has an understanding of fandom, too.

“Shoplifters of the World” may be titled after a song from the ’80s British band the Smiths, and it may play to a nonstop soundtrack of that and almost two dozen more songs from the Manchester-based maestros of morose, but it’s not a movie about the Smiths. It’s a movie about the fans, about what music can mean in the life of people who love it – as Fairuza Balk’s character, Sapphire, says in Cameron Crowe’s “Almost Famous,” “to truly love some silly little piece of music, or some band, so much that it hurts.”

Crowe’s film understands what that means as well as any movie ever has, but the feeling also comes across in the work of British author Nick Hornby, including “High Fidelity”; in everything from Robert Zemeckis’ 1978 comedy “I Want to Hold Your Hand” to John Carney’s 2016 film “Sing Street”; and more recently in Gurinder Chadha’s “Blinded by the Light.”

Also Read: 'Nobody' Film Review: Bob Odenkirk Blows His Stack and His Cover in Delirious Shoot 'Em Up

“Shoplifters,” though, doesn’t have the vitality of those films; it’s an ensemble coming-of-age film whose characters struggle to get beyond the first Smiths song that serves as a chapter title, “Heaven Knows I’m Miserable Now.” And while its best moments do testify to the way the right song can make sense of the world, it mostly uses the music as a backdrop for jumbled teen coming-of-age melodramas.

The setting is Denver 1987, on the September day when the news breaks that the Smiths have broken up. When she hears the news, Cleo (Helena Howard, “Madeline’s Madeline”) lets out a scream, then heads to the local record store to commiserate with the clerk, Dean (Ellar Coltrane, all grown up since “Boyhood”), or maybe to steal some more cassette tapes.

“What do we do now?” moans Cleo. “Our music died today and nobody even cares.” That’s apparently true, judging by the fact that every time anybody in the movie turns on the radio, it’s tuned to the heavy metal show on KISS 101, with stoner deejay Full Metal Mickey (Joe Manganiello, also a producer of the film).

But Cleo and Dean have different ways of dealing with their pain: Cleo hits the town with her friend Billy, determined to get him wrecked before he goes into the military in the morning, while Dean grabs a stack of Smiths LPs and the gun he keeps under the register and heads to the radio station to demand that Full Metal Mickey spend the night playing the Smiths. (This part of the film is based on the story of a fan who did plan to commandeer a radio station after the band broke up, but changed his mind and turned himself in instead.)

“Did you consider a candlelit vigil, something less illegal?” asks Mickey. “If the Denver suicide rate spokes overnight, it’s your fault.”

For the next hour or so, the movie jumps between Dean and Mickey in the booth and Cleo and Billy out on the town with their pals Sheila (Elena Kampouris) and Patrick (James Bloor). They’re all at a crossroads, it seems: Patrick is heading to London, Cleo wants to go to Paris, Sheila just wants to get out of Denver and Billy is making his parents happy by joining the military.

But they’re all loaded down with various other teen melodramas: Sheila wants sex but Patrick has chosen to be celibate because the Smiths singer Morrisey is, or maybe he’s gay but won’t admit it; Billy’s adapting to his father’s idea of masculinity but may have gender identity issues; and Cleo just wants to live in a world where the Smiths are making records and Wang Chung and Mr. Mister are not.

Since this is 1987, their frame of reference is John Hughes movies, which were replete with teen angst set to peppy new wave music. But Cleo trashes Hughes movies because she doesn’t like the way Molly Ringwald tries to get the popular kids to like her; “Shoplifters of the World” would clearly like to be a darker flip side to Hughes.

The glorious, doomy ennui of the Smiths is an appropriate soundtrack to this, because it sends itself up in a certain way – Morrisey always did have a cynical sense of humor about its own doomy ennui. But the movie jumps around, questions of gender and sexuality are raised but then dealt with only half-heartedly, and it’s hard to feel the stakes for most of these people as the night goes on.

The most interesting action takes place not in drunken couplings or on raucous dance floors, but in the radio station where Dean and Mickey come to an uneasy understanding over a gun and a stack of Smiths records. (I hate that the needle isn’t usually in the right place on the albums when we cut to closeups of the records spinning, but maybe that’s just a pet peeve of mine.)

Despite the film’s emphasis on the kids, it’s the 40-something hard rock deejay that comes into focus as the most nuanced and intriguing character. Full Metal Mickey starts out as a caricature and ends up as a sympathetic and fleshed-out guy who’s found both the joys and the limitations of using music as a refuge. And he warms to the Smiths as the night goes on, or maybe he just recognizes something in the way that Dean and others are looking for their own place in that music.

“It seems in these uncertain times of chaos and fear, a song can still save your life,” says Mickey in the wee hours, as “Shoplifters of the World” heads for a quiet and unexpectedly satisfying resolution, at least for a couple of the characters. That’s a message that can cut through the familiar story beats, and one that doesn’t have to be about the Smiths at all.

“Shoplifters of the World” will be released in theaters, on demand and on digital on March 26.