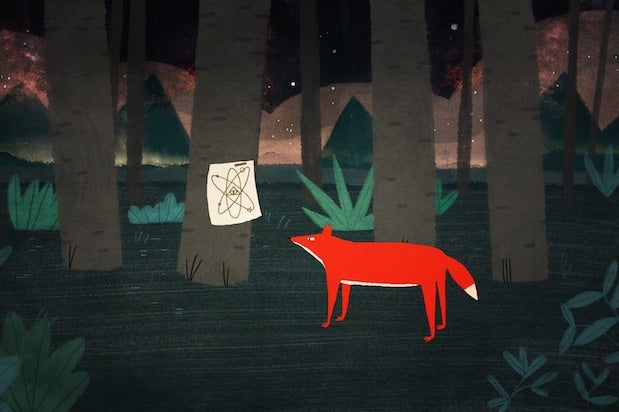 How do you take 47 separate and largely unrelated vignettes, many of them no more than a few seconds in length, and turn them into a coherent movie?

That was the task facing Hungarian animator Réka Bucsi, who spent a year animating and assembling “Symphony No. 42,” an adventurous short that was shortlisted for last year’s Best Animated Feature Oscar and is now one of the finalists in TheWrap‘s ShortList Film Festival.

“I just wanted to experiment with narrative, and also to do something I loved,” said Bucsi, whose 10-minute short served as her “graduation film” when she received her masters degree from Moholy-Nagy University of Art and Design in Budapest, Hungary. “It’s classic frame-by-frame animation, which takes a lot of time — so if you don’t have fun, that’s a problem.”

Busci told TheWrap that her initial idea was to be experimental and to construct a film in which sound design was a key element. She drew by hand on a digital tablet, “playing around with a lot of different scenes.” Most involved animals: an elephant painting “HELP ME” in his pen in the zoo, a wolf vomiting into the toilet, a hippo surfacing out of the tile floor of a kitchen, a penguin with a pie thrown into its face, monkeys typing on computers …

“I wrote a lot and drew a lot,” she said. “And then after a while I started to see the connections between specific scenes that I liked. And I started to build a bigger and more coherent picture.”

The result, she added, had to do with “the irrational connections between human nature and animals,” but she wasn’t looking to make any specific points about the way humans interact with their environment. “Even if the viewer doesn’t see all the connections, that’s fine,” she said. “I’m more interested in feeling and atmosphere than in a character-based storyline.”

Bucsi is now dividing her time between Hungary and Denmark, where she’s working on another animated film, “Love.”

“It’s interesting to think about doing a feature,” she said, “but for now I’m more interested in what you can do in shorts, which is to be more experimental.”

Watch the film above. Viewers can also screen the films at any time during the festival at Shortlistfilmfestival.com and vote from Aug. 4-18.