“CODA” writer and director Siân Heder has signed a multiyear overall deal with Apple, the streamer announced on Wednesday.

Under the deal, Apple will have a first-look on her features, as well as an exclusive deal for series written and developed by Heder.

In January, Apple bought Heder’s film “CODA” for a record-breaking $25 million after an intense bidding war. Heder wrote and directed the drama about a teen girl who is the only hearing person in her deaf family and is stuck keeping their fishing business afloat. It starred Emilia Jones, Troy Kotsur, Ferdia Walsh-Peelo, Daniel Durant, Amy Forsyth, Kevin Chapman and Oscar winner Marlee Matlin. Apple and Heder also collaborated on the critically acclaimed series “Little America.” 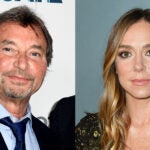 Heder is currently serving as executive producer and co-showrunner on “Little America.” Her other credits include writing and producing for “Orange is the New Black” and writing for “Men of a Certain Age,” which earned her a Peabody Award. She has also directed episodes of “GLOW,” “Orange is the New Black,” “The Path” and “Little America.” Her debut feature film, “Tallulah,” starred Elliot Page and Allison Janney and premiered at the 2016 Sundance Film Festival.