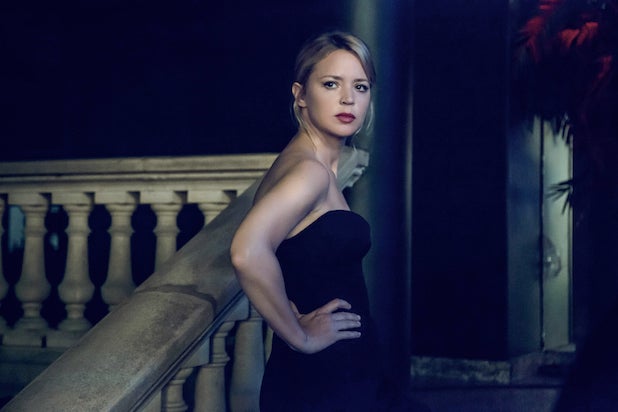 As the say, nature abhors a vacuum.

So once it became clear that longtime Cannes stalwart Woody Allen probably wouldn’t be turning up on the red carpet anytime soon, you knew that someone would eventually come around to fill that void (in terms of film styles, that is — Cannes has no shortage of scandal magnets).

Lo and behold, someone has. A particular someone named Justine Triet, whose volatile dramedy “Sibyl” was the final film to screen in competition at the Cannes Film Festival on Friday night.

Only, in a convention-defying move that speaks to the director’s larger intent, Triet cribs from Allen’s least beloved period; instead of drawing from those “early, funny films,” this story of a psychiatrist who becomes unhealthily involved with her patient draws a straight line to darker Allen films like “September” and “Another Woman.”

Triet has apparently cited the latter film as a direct reference, but believe me when I say the comparison arrived naturally when watching the film. How could it not, for this tale of put-together big city psychiatrist Sibyl (Virginie Efira, from “Elle”), who decides to leave it all it behind to start life anew as a novelist?

Struck with acute writer’s block, she agrees to take one last patient, a film actress named Margot (Adele Exarchopoulos of “Blue is the Warmest Color”) who is pregnant with her co-star’s child, and then mine her patient’s life for inspiration.

The first half of the film moves on that late-80’s Allen groove, interrogating questions of ethics, authorship and big city neuroses. A recovering alcoholic still scarred by a former toxic relationship, Sibyl looks at her patient, thinks, “There but for the grace of God go I,” and uses her as a muse.

But just when you think you’ve got it pegged, “Sibyl” shifts in tone and locale. When all of sudden Sibyl finds herself pulled into the controlled chaos of a film shoot on the island of Stromboli, the film pulls a 180 and starts delivering as an all-out farce.

Actors Gaspard Ulliel (“Saint Laurent”) and Sandra Hüller (“Toni Erdmann”) join the fray as that film-within-a-film’s respective star and director who are in a relationship with one another, though he’s also the father of Margot’s child. If the claustrophobic first act showed a kinship with Allen’s “Another Woman,” the film’s move to sunny Italy in part two could share the title of another 1988 movie – “Women on the Verge of a Nervous Breakdown.”

Because that’s basically what happens as Sibyl, Margot and frenzied director Mika circle each other on set and jointly melt down in the sun — all while Triet mines their neuroses to great comedic effect before swinging back towards pathos.

With a cast that feels like a who’s who of recent breakout hits, a semi-serious focus on filmmaking and an appealingly sun-dappled Mediterranean setting, “Sibyl” offers the Cannes competition a perfect closing note – though I wouldn’t be surprised to hear Efira’s name again at Saturday night’s award ceremony.

The actress has had a remarkable rise – going from introducing music videos on Belgian TV in the early 2000s and headlining forgettable romantic comedies for nearly a decade, to her perch as one of the most interesting French actresses working today.

With “Sibyl,” she should break out even further. She holds this film together through its various swings, and comes off stronger for it. Efira’s a proven hand at comedy with art-house bona fides and that X-factor of star power; there’s no one quite like her on the international stage.

And as they say, nature abhors a vacuum.