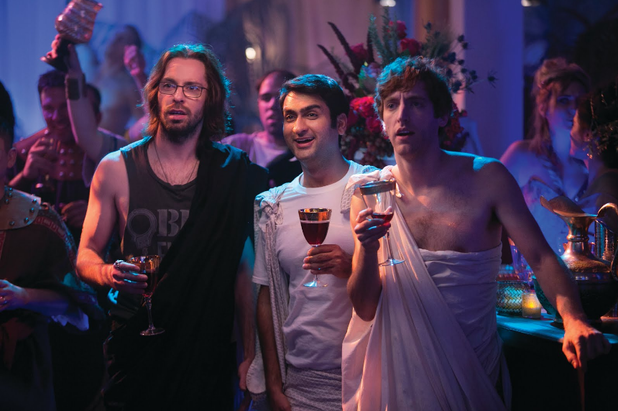 Whatever happens at the Emmys, HBO’s “Silicon Valley” will go home with at least one honor: It is the only Emmy-nominated series this year with a conclusion that hinged on a massive, intricately crafted dick joke.

The joke–in which the show’s lead characters calculate how to most efficiently hand out hand jobs at TechCrunch’s Disrupt conference in hopes of winning the tech competition–leads to a design breakthrough in their killer app. It’s probably the smartest dick joke ever told.

“Silicon Valley” and “Orange Is the New Black” are this year’s new entrants into the Outstanding Comedy Emmy race. Both will try to upset “Modern Family”, which has won for the last four years. But let’s talk a little more about that joke, because it says a lot about the show.

“If you break it down, it’s really an unbelievably chaste dick joke,” said executive producer Alec Berg. “This is about math. This is about physics. The guys maybe don’t even know that they’re talking about dicks.” Added Judge, “We sat around in the writers’ room pretty much having the same conversation that they’re having. And actually drawing on dry erase boards.”

It isn’t the kind of plotting that goes on in the writers’ room for “Mad Men” (though it wouldn’t be totally out of place for “Game of Thrones”). But the sequence isn’t gross for the sake of being gross. Like the rest of the show, it helps puncture the tech bubble and egos. “Silicon Valley” delights in scuffing up the black turtlenecks of new billionaires. “I think people are a little tired of the smug self-satisfied faces of tech getting billions of dollars and talking about how they’re saving the world,” Judge said.

Yet the more “Silicon Valley” makes fun of Silicon Valley, the more Silicon Valley loves “Silicon Valley”. Companies like Google and YouTube have opened their doors to the show, like audience members begging an insult comic to make fun of them next. “I’ve met more billionaires than I could count now,” said Judge.

Among those he’s sat down with since the show premiered were the Winklevoss twins, the heavies of The Social Network. “They’re guys you probably want to hate, but they’re really nice guys,” said Judge. “Ridiculously good-looking, and they were in the Olympics and rich, and there’s two of ‘em. It’s kind of ridiculous, but I actually really liked ‘em and they were obviously really intelligent, interesting guys with a lot of really good stories.”

But “Silicon Valley” has another intricate joke: Though Judge worked in Silicon Valley years ago, many of the shots the show takes at the tech world are actually based on Judge and Berg’s experiences in Hollywood. Judge says the show’s early dilemma, in which developer Richard Hendriks (Thomas Middleditch) must choose between selling his product for $10 million or keeping ownership of it, reflected his own experience creating “Beavis and Butt-Head”.

“I can do the tech-to-Hollywood conversion in my head,” said Berg. “Startups are like pitching a TV show. You come up with an idea, you go around to the networks, you see if anyone’s interested. They give you a little bit money to make a pilot. You make a pilot. They may order a season. That’s Series A. You make that season. If it does well enough, they order another season. Now you’re in your Series B. Eventually it goes to syndication, and that’s acquisition. The parallels between startups and TV shows and movies are very strong.”

Roommates in a home/incubator, the lead male characters have mostly kept to themselves. Amanda Crew‘s character, Amanda, was the only woman who appeared with any regularity. Judge and Berg say the gender imbalance is typical of the real Silicon Valley–the most male-dominated shot in the show is one they took of real attendees at a tech conference–but that they want more women now that the company is out of the incubator.

And there’s another possible benefit: Fewer penises at the next Disrupt conference.