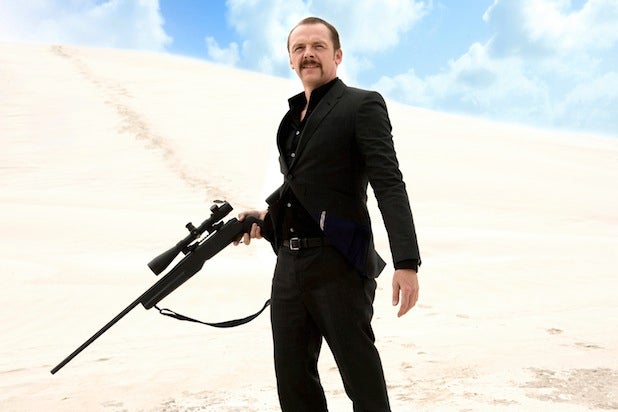 Sometimes, it only takes one man to put the international in the Toronto International Film Festival. And this year, that man may well be the British comic actor and writer Simon Pegg, who is coming to TIFF on Friday with a pair of films.

One is a bloody black comedy, “Kill Me Three Times,” in which Pegg plays an implacable hitman who can’t understand why his best-laid plans are going awry. It was shot in a small village in Western Australia.

The other is a globe-trotting adventure, “Hector and the Search for Happiness,” with Pegg as a psychiatrist in search of, yes, happiness. It was shot on five continents, on locations that ranged from Vancouver and Los Angeles to Shanghai and South Africa.

And when Pegg arrives in Toronto on Friday, he’ll be coming in from Marrakesh, Morocco, where he’s been filming the fifth “” film.

But then, Pegg has always been a little hard to pin down, both geographically and stylistically. In indie circles he might be best known for co-writing and starring in “Shaun of the Dead,” “Hot Fuzz” and “” – but in the mainstream, he’s Scotty in ‘ “” movies, and ‘s sidekick in the last two films.

“I seem to have a lot going on,” laughed Pegg as he spoke to TheWrap from Marrakesh on the eve of TIFF.  He’s not kidding: He also has a key voice role in the upcoming animated film “Boxtrolls,” and lead parts in the romantic comedy “Man Up” (with and ) and in “Absolutely Anything” from Monty Python member Terry Jones.

But those are later. First come his Toronto entries, starting with Saturday’s premiere of “Kill Me Three Times.” A brutal and twisted potboiler full of bloodbaths, double-crosses and vicious fun from Australian director Kriv Stenders, it’s classic midnight-movie material even though it’s in TIFF’s Contemporary World Cinema program.

Also read: Toronto Preview: The Big Festival Arrives With a Winning Streak on the Line

Although Luke Hemsworth, and may have bigger roles, Pegg plays its most memorable character, a calmly efficient enforcer who’s never met a problem he can’t solve with a few gunshots. “I really liked the idea of playing an amoral character,” said Pegg.

“And then they sent me Kriv’s last film, ‘Red Dog,’ and I thought, this is a guy who loves filmmaking.”

But when Pegg’s character comes to a small Australian town to clean up a mess involving money, adultery and skullduggery, he finds that the situation stubbornly resists all his best efforts to shoot, collect and run.

“He’s a professional who is used to doing things a certain way,” said Pegg. “And he has no sense what to do about the crazy situation as it starts to unravel. It’s really annoying to him – and with every new setback, it becomes more and more annoying.”

That annoyance is the funniest thing about the film, which climaxes with a ridiculously entertaining ending best left undescribed. And for Pegg, it was quick work: He flew to Australia, worked every day for 14 days, then headed home to England.

“I’d been away from home doing ‘Hector’ when I got the script, and that was four months of traveling around the world,” he said. “I liked this script, but when I learned that it was being shot in Western Australia, I was really torn.

“I didn’t want to say no, but I also wanted to spend time with my daughter. So I said, ‘Look, if you can have me out in about two weeks, I’ll do it.'”

The result was a wildly different experience from “Hector,” which premieres at TIFF on Sunday. That film, he said, is about “a guy who never really grew up. He seemingly has everything he needs to be happy, but he’s not. So he hits the road and goes on a research trip to discover what happiness is – although the truth is, he’s really trying to discover if he can be happy.”

See video: Simon Pegg Travels the World in ‘Hector and the Search for Happiness’ Trailer

The next Pegg movie to be released, “Boxtrolls,” will reunite him with , his co-star in the beloved trilogy of “Shaun of the Dead,” “Hot Fuzz” and “” – well kind of. Not only do the two not share any scenes in the animated film from Laika, they each didn’t even know the other was in the movie until after it was finished.

“You don’t usually see the other actors when you’re doing an animated movie, and it’s not like Nick and I are always in touch,” he said with a laugh. “I didn’t even know he was in the movie until I saw it in the press.”