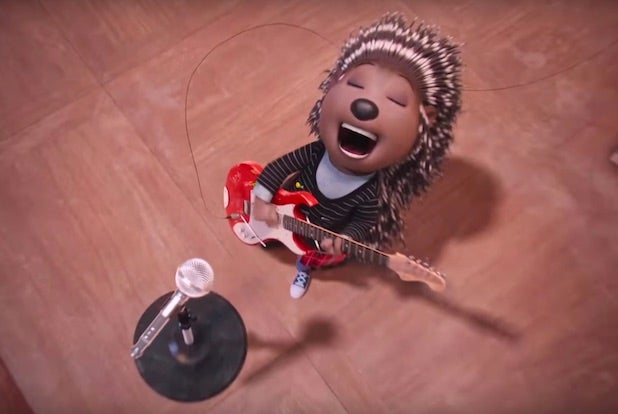 Can Illumination Entertainment’s animation czar Chris Meledandri pull a John Lasseter and become a critical darling to go along with the mint he’s made selling Minions merchandise?

On the evidence of Illumination’s “Sing,” which premiered on Saturday at the Toronto International Film Festival, the answer is a conditional yes.

Directed by Garth Jennings from an idea by Meledandri, “Sing” isn’t a top-to-bottom knockout like the recent animated gems “Inside Out,” “The Lego Movie,” “Rango” and this year’s “Zootopia” and “Kubo and the Two Strings.” But it starts out fun and then sneaks up on you for a final stretch that is both rousing and genuinely emotional.

Sort of a “hey, kids, let’s put on a show” musical for the age of “American Idol” and “The Voice,” it follows a bargain-basement impresario (voiced by Matthew McConaughey) as he stages a singing competition in an attempt to save his theater from foreclosure.

Reese Witherspoon, Scarlett Johansson, John C. Reilly, Seth MacFarlane and others play an array of sidekicks and wannabe stars: a teenage gorilla who’s being pressured to join the family gang, an overworked pig mother of 25, an elephant too shy to sing in public …

For the first half of the movie, the stories come fast and furious, and so do the snippets of dozens of pop songs. It’s not frantic in the overly adrenalized manner of many animated films, but it’s something of a jumble nonetheless.

But when the characters hit rock bottom, the movie quietly gets more emotional and more sure-handed. It’s not easy to make us feel for animated characters who we’ve been laughing at, but we do, as the repeated applause in Toronto’s Princess of Wales Theatre showed.

Of course it helps that the film makes use of some genuinely great pop songs, including Stevie Wonder’s “Doncha Worry ‘Bout a Thing,” Leonard Cohen’s “Hallelujah” and especially the Beatles’ “Golden Slumbers/Carry That Weight.”

Sure, a couple of those songs are pretty overused — but as a post-screening performance by Jennifer Hudson and Tori Kelly showed, the darn things also work.

And so does “Sing.” In an extremely strong year for animation, Illumination has taken a big step up.