When Tom Ford goes to the Oscars, it’s usually because his clothes are being worn on the big night by the likes of Daniel Craig and Julianne Moore. But he may make it to the Kodak Theater as a nominee next March, with his stylish, moody period piece “A Single Man” picking up raves in advance of its Friday opening.

The celebrated fashion designer (who designed for Gucci before launching his own label) makes an auspicious screenwriting and directing debut with the film, based on a book by Christopher Isherwood. “A Single Man” delineates a day in the life of a schoolteacher (Colin Firth) who’s despondent after the recent death of his partner of 16 years. After stellar showings at the Venice and Toronto Film Festivals, the film was acquired for distribution by the Weinstein Company.

There’s been a lot of talk about the latest trailer for “A Single Man,” which removes all of the most overtly gay elements from your original trailer. Were you comfortable with that? 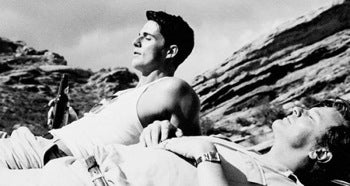 I wasn’t comfortable with it at all. I think our society is a bit twisted. The first trailer is the one that I cut before we had a distributor, and I wish I could have left it intact. But we had to do a trailer that was more broadly accessible to a wider audience. Kissing between two men is considered adult content, and there are only certain places that you can run trailers that show it. It’s very strange, because you can turn on HBO and see full-frontal male nudity — but for some reason, things are more restrictive in cinema.
As a first-time director, what were the elements of the job that took you the furthest out of your comfort zone?
None of them. I don’t want to sound arrogant, and I learned an enormous amount, but in terms of being prepared as a director, I felt really, really comfortable, once I had the script in a place where it felt good. Working as a fashion designer is much more collaborative than people realize. Like a director, you have to be able to communicate a vision to a group of people to help you achieve it, and you have to create an environment where those people feel comfortable enough to perform. And then you have to steer the entire group to help you realize your initial vision.
But being on the set with the actors must have been a new experience.
For some reason, I felt really comfortable working with the actors. Maybe it’s because I knew the characters so well and had done so much preparation before. We shot in 21 days, and having worked for a large company where big budgets were at stake, I’m very pragmatic and very organized and I make decisions very quickly. So I felt very comfortable doing that.
The real risk for me, and the thing I was most nervous about, is that I’m a very private, shy person, and putting all of my feelings and emotions onto a screen is not something that comes naturally to me. 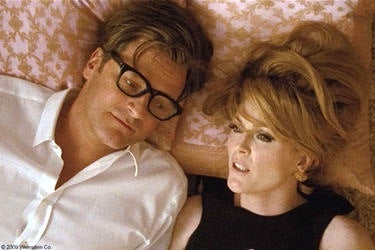 The Christopher Isherwood book on which the film is based is largely an internal monologue, with very little plot. What made you think there was a movie in there?
I just had a feeling. I’m very intuitive, and whenever I trust my intuition things usually work out well. I just know that the message of this book seemed universal to me. I know that everyone takes away their own meanings from works of literature — but for me, it was really about living in the present and appreciating the small things in your life, and trying to let go of your past. And it’s about love.
Those themes are always valid, but at this moment in time, when the world economy is in a certain situation, and a lot of people have lost their jobs, and we’re paying the price for a moment of material excess, I think it’s a good moment to look at the things in life which are much more important and have nothing to do with material success, or what Western culture tells us we should want.
And yet, most of your career has been devoted to designing and selling just those sort of things.
Oh, I realize that I’ve also been promoting that kind of life. As a fashion designer, I have a bit of a split personality, and I’ve struggled with that. And I’m fine with materialism. We live in a material world, we are material creatures, and there is a certain pleasure to the physicality of things. And I think as long as we keep them in perspective they’re fine. But I think sometimes we lose perspective.
When you fleshed out Isherwood’s book in your screenplay, a lot of the things you added came from your personal life, didn’t they?
Right. Write what you know, you always hear. And especially since this was my first screenplay, I didn’t want to venture too far from what I felt comfortable with. The idea for the plot, the suicide that the character of George was planning, is the most dramatic, bold move that I made, and I had to really think about it before I did it. And that suicide was modeled after an actual suicide that took place in my family — a relative actually did kill himself in a sleeping bag after laying out the suit that I’d given him and paying all his bills.
Also, Julianne Moore’s character is a conglomeration of my grandmother and other women I’ve known in my life, and relationships I’ve had with women. I’ve had romantic relationships with women, and they’ve only gone to a certain level, and I’ve seen the frustration the women felt. And then there were lots of smaller things. George lying on the sofa with his partner and the dogs, that really comes from my own personal life. I actually do have to pay my boyfriend of 23 years to walk the dog. Those are my dogs.
The little girl in the bank is based on my sister, and I did give her shampoo egg treatments as a child. George didn’t have a last name in the book, so I named him after my first boyfriend, who introduced me to David Hockney, who introduced me to Christopher Isherwood.
You’ve got a poster from the Hitchcock movie “Psycho” featured promimently in the film. And when the little girl comes up to George in the bank and the camera focuses on her shoes, it seems to be a clear “Wizard of Oz” reference.
It is. That’s the most literal reference in the film.
Were there touchstones you drew on for the look and the feel of this film?
Yes. The only specific one was the little girl tapping her feet instead of clicking them together, and then everything goes into color. But Hitchcock is a favorite director of mine, and Kubrick, Antonioni … One of my favorite films is “Umberto D.” by Vittorio De Sica, which is about an old man and a dog. It’s almost a silent film, in a way, with these long moments. And I wanted to develop that kind of intimacy with Colin Firth, just through us watching and observing him while he goes about preparing for his day, preparing for his suicide …
People have compared the film to Douglas Sirk, which is not a real reference point of mine. I think maybe they’re responding to the exaggerated color, and maybe the lush quality of things, and maybe the artificiality. But I have a wide range of favorite directors. I think you file things away in your hard drive, certain camera angles and certain looks from other films — and I hope that when they come back out, they have a personal stamp on them.
What’s next? Back to fashion design, or more films?
Oh, I hope I’m lucky enough to make many more films. Really, I’m more proud of this than anything I’ve accomplished in my life, apart from personal relationships. I’m not somebody who necessarily fears death, but while I was making this, I was terrified that I was going to die before I finished it. It was that important to me.
It was the most fun I’ve had in my entire life, and it means the most to me. Because I think it’s the first time, maybe, that I have really expressed things that are very personal. I’m usually quite reserved, and I don’t wear my heart on my sleeve or show my emotions in a way that people can see. So to put that much of myself into something, and then send it out into the world, it was really the first time I’d ever done that.
FEATURED VIDEO (SPONSORED)
x
Looks like you're enjoying reading