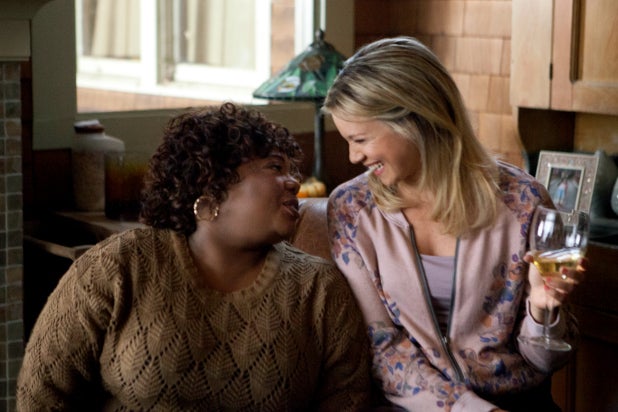 For evidence of how bad working actresses have it in contemporary Hollywood, look no further than the cavalcade of talented female performers who have subjected themselves to toiling in the flat-footed melodramas of Tyler Perry; if Alfre Woodard, Kathy Bates and Sanaa Lathan (“The Family That Preys”), Thandie Newton and Gabrielle Union (“Good Deeds”) and Taraji P. Henson (“I Can Do Bad All By Myself”) aren’t getting better offers than to star in Perry’s hacky, retrograde, low-budget movies, times are tough indeed.

The most misused performer in his latest, “The Single Moms Club,” would have to be the talented comic Wendi McClendon-Covey; what few laughs this new movie offers are clearly her own spontaneous inventions. (Just watch the closing credits of the film. Or of “Bridesmaids.” In fact, just watch “Bridesmaids” again and forget this one entirely.)

Also read: Tyler Perry Says So Long, Madea, Hello Oprah: How the Cross-Dressing Mogul Has Fared at the Box Office

When she’s unleashed, McClendon-Covey gets a mischievous snarl on her face and pops out some brilliantly funny non sequiturs. The rest of the time, unfortunately, she plays a career woman who learns that she’s devoted too much energy to her career and not enough to her tween daughter.

No, really, that’s what the movie says. There’s a scene where her sexist boss tells her she didn’t make partner because she obviously needs to be spending more time at home, and the way the moment is presented, it’s clear that writer-director Tyler Perry agrees with this sentiment.

Tyler Perry, beloved of Oprah Winfrey fans everywhere, the man who’s supposed to be so good at writing female characters and telling their stories, has once again made a movie about women who need to focus more energy on getting a man and on raising their kids than on pursuing their career dreams. That kind of drive and ambition is apparently reserved only for 45-year-old entertainment moguls who put out two movies a year, plus countless hours of bad television and preachy theater, all of which sermonize about 1950s-style family values and all created by an unmarried, childless man.

But hey, where else in 2014 are you going to see a scene where a sassy, working-class black woman swoops in to calm the crying babies of a rich, dithering white lady? In any other movie, the filmmaker would rightly be accused of trafficking in lazy stereotypes, but lazy stereotypes are the beachhead into which Tyler Perry has firmly planted his flag.

“The Single Moms Club” is a movie in which all the white women are emotionally constipated, all the black women have been abandoned by men who are drug addicts, and the Latino characters hang out in a Mexican restaurant where a mariachi band has “Cielito Lindo” on infinite loop. And while it’s frequently unintentionally hilarious, it’s also crushingly dull.

The film brings together five cardboard cut-outs: reporter and frustrated writer May (Nia Long); Esperanza (Zulay Hanao, of Perry’s “Love Thy Neighbor”), who’s hiding her boyfriend from her rotter ex-husband (Eddie Cibrian) who pays the bills; Waffle House waitress Lytia (Cocoa Brown, of Perry’s “For Better or Worse”), who pushes her bright young son so he won’t follow his older brother to jail; pampered Hillary (Amy Smart), learning to live without staff now that her husband has slashed her alimony; and publishing exec Jan (McClendon-Covey), who opted for single motherhood but now finds it inhibiting her climb up the corporate ladder.

When their kids get into trouble at their schmancy prep school, the women are forced to organize a school fundraiser, and while some of them bristle at first, they’re soon laughing over wine and bonding over their shared problems. (Problems written so broadly that it would suggest Perry hasn’t met or talked to a single mom in the last 20 years.)

Each one takes turns babysitting for the other four so the ladies can have a night out, a reasonable idea that goes south when one kid runs off while Hillary is on watch. This event leads to several ridiculous scenes, from the police not being immediately called to three of the moms taking an Amber alert as an excuse to make out with the Mr. Right that the movie has so conveniently provided.

One of these knights in shining armor is played by Perry, whose attempts to give the character blue-collar realness fall short; James Earl Jones in “Claudine,” he ain’t.

Everything gets tied up in tacky bows by the end, as the moms help each other out and have unconvincing heart-to-hearts with their kids and generally find happy endings. Spoiler: Jan publishes May’s book, having taken the manuscript from her apartment, and May is thrilled to learn she’s an author without having to sign a contract or perform lengthy revisions. Add “How Books Work” to the list of things Tyler Perry either doesn’t understand or doesn’t bother to plot and script in a believable fashion.

While Perry’s writing remains consistently tone-deaf and his directing abilities seem to vacillate wildly from film to film, he’s had exactly one good idea: the hilariously deranged Madea, who livens up the dreariest of his movies. She is, sadly, nowhere to be found here, and that’s a pity.

These drippy ladies could use some talking-to from the no-nonsense Madea, and she, in turn, would no doubt love to learn the secret of how you get five overflowing glasses of wine out of one standard-sized bottle.