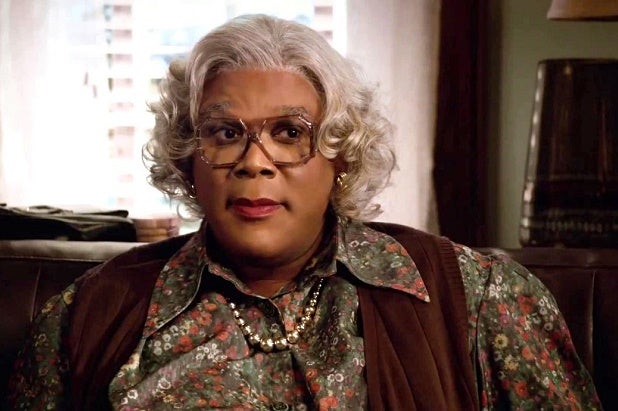 So long, Madea — at least for now.

Multi-hyphenate mogul Tyler Perry and his tough-old-broad alter ego are taking a break from movies, so that he can focus more on projects for the small screen.

Three of Perry’s series — “The Haves and Have Nots,” “For Better or Worse” and “Love They Neighbor” — are already scoring strong ratings on Oprah Winfrey‘s OWN, where Perry has an exclusive multi-year production deal at OWN, in addition to equity stake in the company. His latest TV series, “Single Moms Club,” based on the movie opening Friday, is set to air in the fall.

Also read: Tyler Perry’s ‘Haves and the Have Nots’ Finale Is OWN’s Most-Watched Program Ever

This shift marks the end of an era for Perry and Lionsgate Entertainment, the film studio where Perry had a deal since 2005. In February, the two parties decided they would not renew that deal — but they also didn’t rule out future collaborations.

Both flourished during their partnership, with Perry building an Atlanta-based film and TV production empire and Lionsgate growing into a major Hollywood studio. The “Twilight” and “Hunger Games” franchises obviously played a major factor in that growth, but Perry helped the studio — which launched in 1997 — find its early footing with films that African-American audiences in particular loved.

“Tyler Perry‘s Diary of a Black Woman” — all of his films are branded — was his first movie to get things off to a great start. He produced, wrote, directed and starred in the $5.5 million comedy-drama that went on to gross more than $50 million in 2005. It was also the debut of the straight-shooting and gleefully-thuggish granny, Madea.

Since then, the prolific Perry has delivered 14 films for Lionsgate, with nearly all of them featuring his trademark mixture of broad (no Madea pun intended) comedy, poignant moments and inspirational messages. Critics were rarely impressed, but the laughs and underlying do-the-right-thing theme of his films struck a chord with his audiences.

“There was a huge void in the marketplace, and he has filled it, and filled it and filled it some more,” said Exhibitor Relations vice-president and senior analysts Jeff Bock. “No director — African-American or otherwise — has ever so consistently tapped into a specific audience like Perry.”

His movies, which mostly have budgets in the $20 million range, have grossed nearly $750 million. On average, their opening weekends bring in $21 million, and net a domestic gross of $50 million. That’s quite a return on investment.

“Not only did the success of Perry films sustain Lionsgate for a considerable time, but he has become so successful that he doesn’t even work within the constraints of the Hollywood system,” Bock said. “Not many artists ever achieve that type of creative freedom and certainly not for the extended period that Perry has.”

His biggest hit was 2009’s “Madea Goes to Jail,” which opened with$41 million and wound up at $90 million domestically. His least successful film was “Tyler Perry Presents the Peeples,” 2013’s Craig Robinson-Kerry Washington comedy on which he was only a producer. It opened under $5 million and topped out at $9 million.

Here’s a look back at Perry’s movies, courtesy of Box Office Mojo: