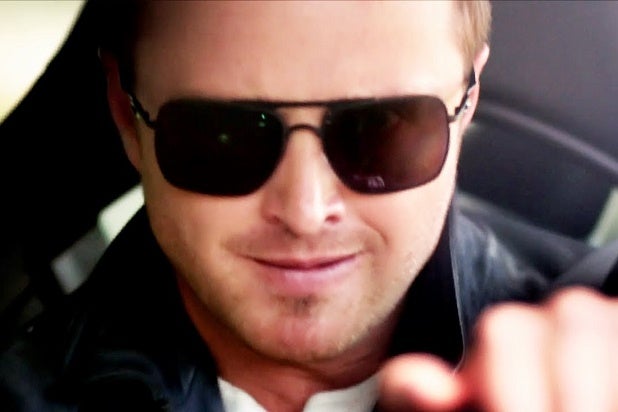 “Need for Speed,” the video game-based muscle car movie starring Aaron Paul of TV’s “Breaking Bad,” will try to drive “300: Rise of an Empire” from the top spot at the box office this weekend — while “Veronica Mars,” the crowd-funding craze’s biggest film to date, starts its limited run.

“Need for Speed’ might have a narrow edge for the top spot. DreamWorks’ octane-fueled action film could hit $25 million, say the analysts and distributor Disney. But if Warner Bros.’ R-rated sword-sand-sandals saga hangs on to a little more than  half of the $45 million that it debuted at No. 1 with last week, it will be right there, too.

“Tyler Perry‘s Single Mom’s Club,” the weekend’s other wide opener, is projected to debut with around $15 million for Lionsgate. DreamWorks Animation’s “Mr. Peabody & Sherman” should have a second week in that range as well.

With “Need for Speed,” “Rise of an Empire” and Liam Neeson‘s “Non-Stop” all playing, there is a lot of testosterone — and films for young men are the primary demographic target — in the marketplace right now.

Also read: ‘Need for Speed’ Review: Aaron Paul Can’t Get This Vehicle Off the Lot

“This will be the third straight week a male-skewing action movie has come out,” said BoxOffice.com vice-president and senior analyst Phil Contrino. “At some point, fatigue has to set in for young males.'”

But if the millions of people who have played the “Need for Speed” video games for the past decade turn out, it won’t be this weekend. Electronic Arts, the company that launched the car racing series in 1994, co-financed the $66 million movie along with DreamWorks partner Reliance Entertainment and Disney’s Touchstone. But mobilizing those masses is not a given.

“With the practical (rather than CGI) stunts and 3D, it’s designed to give you that behind-the-wheel experience,” said Disney’s distribution chief Dave Hollis. “We think that’s going to appeal very much to the gamer crowd.” The Thursday night numbers — screenings will start at 8 p.m. — will be an early indicator of whether “Need for Speed” will connect with the console crowd.

None of the hugely popular “Fast and Furious” car movies, to which “Need for Speed” will inevitably be compared, were done in 3D. That could help the new film at the overseas box office, where 3D remains a powerful draw. Disney is opening “Need for Speed” in roughly 30 foreign markets this weekend, including China and the U.K.

Comparisons might keep some devoted “F&F” fans away in the U.S., but DreamWorks and Disney would love to see it connect with the Hispanic audiences that have helped drive Universal’s $2 billion-dollar franchise.

“Need for Speed” is doing OK on social media, but the critics are unimpressed and it’s at 33 percent fresh on Rotten Tomatoes.

“Single Moms Club” is the last film from Perry that Lionsgate will release, at least for now. The two didn’t renew their deal, which runs out with this film, but left the door open for future collaborations.

His first was 2005’s “Diary of a Mad Black Woman” — in which he debuted his righteous drag granny character Madea — and since then he’s written, directed, produced and/or starred in 14 modestly budgeted films for the studio. On average, they’ve brought in about $50 million domestically and together have grossed nearly $750 million without playing overseas.

It’s tracking to open in line with Perry’s previous non-Madea movies. His last release was December’s “Tyler Perry‘s a Madea Christmas,” which opened with $16 million and brought in $52 million domestically.

The critics haven’t weighed in, but Perry’s films typically aren’t screened before their release. “Single Moms” is doing just OK on social media. It’s not far behind where “About Last Night,” the Kevin Hart romantic comedy, was on Twitter prior to its debut, but trails it significantly on Facebook.

“Veronica Mars,” which its followers brought to the big screen with a record-breaking Kickstarter crowd-funding campaign, will open in 291 mainly AMC theaters on Friday via Warner Bros.

It is almost one year to the day after fans of the TV show — which ended its three-season run on UPN and the CW in 2007 — hit their $2 million funding goal in record time.

“Veronica Mars,” which has a strong 77 percent “fresh” rating on Rotten Tomatoes, will also become available for download on Friday via Warner Bros. Home Entertainment.

Focus Features is rolling out Bateman’s R-rated black comedy “Bad Words” in six theaters. Andrew Dodge wrote the script, which features Bateman as a 40-year-old who finds a loophole in the rules of a national spelling bee and hijacks the competition.