Anyone who has ever been enchanted by a Disney animated film at a young age has also probably tried to draw their favorite character from that film, to admittedly mixed results. Disney+’s new documentary series “Sketchbook” aims to instruct viewers on how to draw those classic Disney characters, with the lesson being given by the animators themselves.

The new series, from “Chef’s Table” production company Supper Club and “Into the Unknown: The Making of Frozen 2” producer Amy Astley, in partnership with Walt Disney Animation Studios, centers on various characters from a range of periods in Disney history – newer characters like Mirabel from “Encanto” and Olaf from “Frozen” and more classic characters like the Genie from “Aladdin” and Captain Hook from “Aladdin.” Plus Kuzco from “The Emperor’s New Groove” (a deliciously out-of-left field choice).

Among the animators chosen for the documentary are Disney legends like Eric Goldberg and Mark Henn, both hand-drawn maestros who are bringing the characters they originated back to life, and newer animators like Jin Kim, who are drawing the animators that inspired them (Jin is doing Captain Hook). It’s a wonderful celebration of several generations of animated Disney storytelling and character work, and we can’t wait for the animators to share stories and biographical details along the way.

“This series is an unprecedented look at what it takes to bring these beloved characters to life,” says Jason Sterman, director and executive producer, Supper Club, said in a statement. “We are honored to feature this incredible group of artists who trusted us not only with presenting their skillset, but with sharing their personal, and often emotional, stories with the world. We’re looking forward to audiences becoming inspired to hopefully pick up a pencil and put it to paper themselves.” 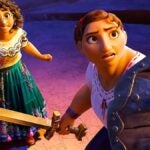 “Think back to your favorite films from Walt Disney Animation Studios, whether from our earliest days, the films of our 1990s renaissance or the award-winning films of today like ‘Encanto’ and ‘Frozen,’ every film starts with an idea, a pencil and an artist. And within the thousands of artists who have created our 60 films over the last century, every person has a unique and special story,” says series executive producer Astley, senior vice president, Publicity/Communications, Creative Legacy, and Brand Strategy for Walt Disney Animation Studios, in a statement. “It was an honor to partner with Supper Club, whose projects such as ‘Chef’s Table’ create beautifully captured, intimate portraits of talented people. With ‘Sketchbook,’ our hope is to demystify the art of drawing, making it accessible for anyone who wants to pick up a pencil and paper while deepening an appreciation for the individuals who contribute to our films.”

“Sketchbook” starts streaming on Disney+ April 27. Get your pencils ready.