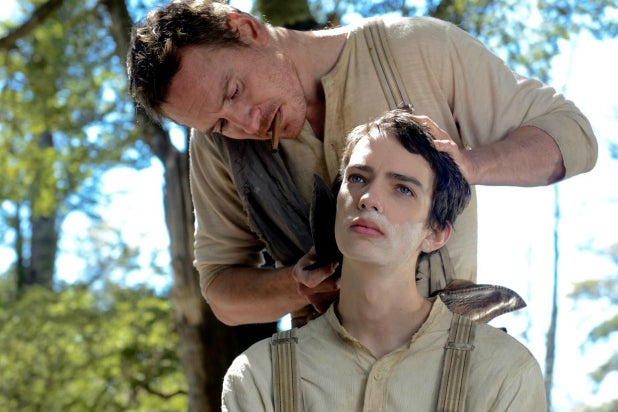 “In a short time, this will be a long time ago,” notes a character in “Slow West,” and that pretty much encapsulates the tone of this offbeat, minor-key Western.

While the film tells a fairly straightforward tale of love and betrayal set against the big skies and sweeping vistas we’ve come to expect in this sort of movie (courtesy of its New Zealand locations), it also subverts and comments upon the stories we tell ourselves about the Old West.

That sort of commentary has been going on for decades, at least as far back as Budd Boetticher and Sergio Leone in the 1960s, and even while “Slow West” isn’t inventing a new kind of Western, it mixes its gorgeous, expansive cinematography with a minimal narrative. There’s not a lot of talking, and what dialogue there is seems to simultaneously create and puncture the myth of the pioneers and renegades who forged the American West.

Kodi Smit-McPhee stars as Jay Cavendish, a Scotsman armed with a horse and a guidebook, making his way alone through the cruel and beautiful wilderness of the New World. The tenderest of tenderfoots, Jay survives a scrape with some Native-slaughtering ex-military types only through the intervention of the grizzled Silas (Michael Fassbender), who forces Jay to hire him as a guide to take him where’s he’s going.

That final destination involves Rose (Caren Pistorius), the servant girl who the besotted, aristocratic Jay has followed across an ocean. As the story unfolds, we learn what Silas’ ultimate motivation is for helping Jay, and why they’re being closely followed by a motley gang of outlaws led by Payne (Ben Mendelsohn).

First-time feature filmmaker John Maclean is in no hurry to unspool his tale, but “Slow West” never feels like it drags over the course of its brisk 84 minutes. Calling to mind classics like “Walkabout” and “Picnic at Hanging Rock,” there are surprising moments of natural beauty and of shocking violence — sometimes piled atop each other — but the movie is never blasé about its bloodshed; there’s a silent montage at the end that revisits every character who dies over the course of the story.

Not that the movie doesn’t offer splashes of wit, from its wonderfully droll dialogue to a sequence that adds insult to injury by literally dumping salt in one character’s wounds.

That the cast is made up of Australians and Germans is never an issue: Aside from the Native Americans who exist at the story’s margins, and are constantly being pursued and killed by the white settlers, everyone’s a foreigner, and the mix of accents and ethnicities feels like an accurate representation of a young nation being explored by international seekers of opportunity and treasure.

Fassbender knows how to give face in the grand style of Steve McQueen and Clint Eastwood, and he fits comfortably into the genre, playing off Smit-McPhee’s twinkly, youthful timidity with quiet reassurance and unexplained hidden agendas. Mendelsohn brings an eccentric brand of villainy and menace to a character who could have easily been a standard-issue black-hat.

“Slow West” might meander a bit, but it never gets lost, and while the film is currently available on demand, it takes a big screen to fully appreciate the wide-open spaces and treacherous, stunning wilderness captured so effectively by cinematographer Robbie Ryan (“Philomena,” “The Last Days on Mars”). Like the untamed territory it traverses, this is a film worth exploring.