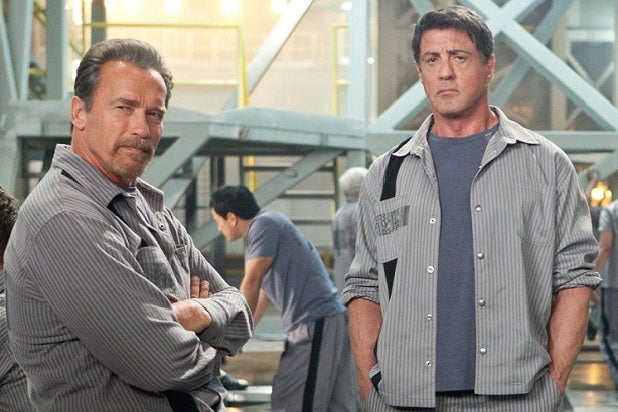 Despite the teaming of Sylvester Stallone and Arnold Schwarzenegger, the prison-break movie “Escape Plan” failed to take off at the box office this weekend, bringing in just $9.8 million.

What would 20 years ago have been an epic pairing felt a bit like a requiem for a couple of aging – Stallone is 67, Schwarzenegger 66 — action movie heavyweights. But it wasn’t a surprise.

The film had been tracking softly for weeks and analysts had projected a debut of less than $10 million for the Summit Entertainment film and that’s right where it came in.

“They’re in a tough spot,” BoxOffice.com editor-in-chief Phil Contrino told TheWrap. “It’s not like they’re going to re-invent themselves at this point.”

Stallone’s movies have brought in $2.9 billion at the worldwide box office since he stepped into the ring for “Rocky” back in 1976 and Schwarzenegger’s have totaled $3.8 billion since he appeared in “Stay Hungry” that same year.

But Arnold’s most recent outing “The Last Stand” opened to a dismal $6.2 million in January, and Sly’s “Bullet to the Head” did even worse, debuting to $4.5 million in February.

“Those movies were supposed to re-energize their careers, but that didn’t happen,” Contrino said. “I think today, their best bets are going with an established franchise.”

The box-office success of Stallone’s “Expendables” movies is one thing that has kept them coming back. The first two of Stallone’s bad-ass geezer films – the first in 2010, the second last year — have brought in more than $575 million globally for Summit, which has scheduled the third installment for next August.

Summit’s exposure was limited on “Escape Plan,” which was also known as “Exit Plan” and “The Tomb” during its development. Equity partner Emmett/Furla picked up about a third of the $50 million production budget. Some of that has been offset by foreign rights sales. It made %9.4 million from 35 markets over the weekend, and has brought in $14.3 million abroad so far.

Also read: Movie Titles Can Matter at the Box Office – But How Much?

It’s not like Hollywood thinks they don’t have hits left in them.

Schwarzenegger, two years removed from his stint as California’s governor, is set to start shooting a new version of “The Terminator” in April for Paramount. And Stallone will be back on the big screen at Christmas with Robert De Niro in the Warner Bros. comedy “Grudge Match.”