One of the strangest cold opens in “Saturday Night Live” history aired on Saturday night, as the show opened on the traditional “SNL” stage instead of a set, and Tom Hanks stumbled out from behind the iconic door to explain that tonight’s show would not be going on as planned.

“Saturday Night Live” announced on Twitter earlier on Saturday that it would have no studio audience or musical guest for the episode, citing the new surge of COVID-19 infections in New York City fueled by the Omicron variant. The producers made an effort to reduce the number of people inside the building for the taping, resulting in a limited cast and crew.

Hanks revealed that they sent the entire cast home and instead launched into a stripped-down version of inducting Paul Rudd into the “Five-Timers Club” (Saturday’s episode marks Rudd’s fifth time hosting “SNL.”) before later explaining that Saturday’s show would be a mix of sketches recorded earlier in the week and other classic “SNL” holiday sketches. 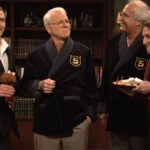 “Thank you, I’m Tom Hanks. Thank you, surviving crew members,” Hanks began, wearing the Five-Timers Jacket that past hosts like Alec Baldwin and Chevy Chase wore to induct new members. Hanks then introduced Tina Fey wearing her own Five-Timers jacket (she’s an official member), who came out on stage to applause from the few crew members in attendance. “Yes, I am here, and this is not the smallest audience I’ve performed for because I have done improv in a Macy’s,” Fey quipped.

The two then introduced Rudd, who was a good sport and all smiles despite the fact that his episode had effectively been half-canceled. He was then officially inducted into the Five-Timers Club by “longest tenured cast member Kenan Thompson,” who congratulated Rudd on hosting the show “four and a half times.”

The cold open even included a pre-recorded bit, as Hanks introduced Steve Martin – a regular of the Five-Timers club – who introduced himself as “Famous Steve Martin.” The joke of the message was that it was pre-recorded for when Tom Hanks was previously inducted, as each mention of Paul Rudd was clearly dubbed over while Martin’s lips said “Tom Hanks.” Even Martin Short made a cameo in the video as a butler, a role he previously played in other Five-Timers sketches (and convenient, since he and Martin are currently filming the second season of “Only Murders in the Building”).

The admittedly jarring cold open ended with Hanks, Rudd, Thompson and Fey explaining that tonight’s show would consist of sketches pre-recorded earlier in the week and some of their favorite older sketches from past shows. “It’s gonna be a little bit like that new Beatles documentary,” Rudd added. “A lot of old footage, but enough new stuff that you’re like, ‘OK yeah, I’ll watch that.”

Indeed, after a pre-recorded sketch about Home Goods, the next sketch back was the iconic “SNL” Digital Short “Dick in a Box” starring Andy Samberg and Justin Timberlake. Through the rest of the episode, pre-recorded and classic sketches were then introduced by Rudd, Hanks, Thompson and Fey on stage.

In the early stages of the COVID-19 pandemic in 2020, “SNL” released three episodes that were filmed entirely remotely by the cast before beginning its 46th season with a limited, masked audience. Full audiences resumed in October of 2021 for Season 47, and the season went off without a hitch so far, but tonight’s show reflects the significant impact that the Omicron variant is having on the entertainment industry at this moment in time. As cases surge in New York City, multiple Broadway performances and even the Radio City Rockettes’ Christmas program have been canceled. 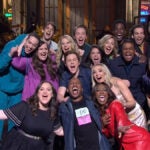