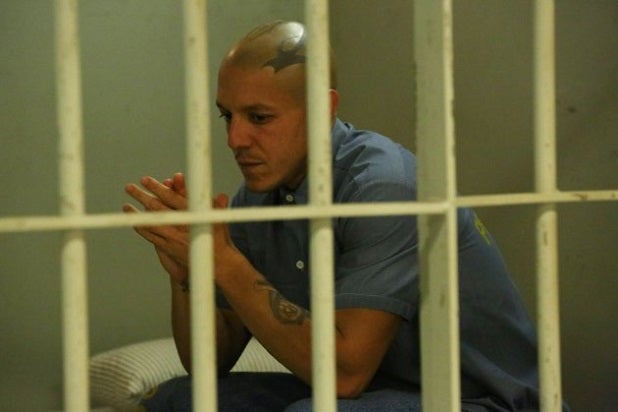 SPOILER ALERT: Do not read this if you don’t want to know what happened on Tuesday night’s episode of “Sons of Anarchy.”

Even by the typically violent standards of “Sons of Anarchy,” Tuesday night’s penultimate episode of the FX biker drama, titled “Red Rose,” offered a jaw-dropping amount of carnage. After Jax Teller (Charlie Hunnam) discovered that his mother Gemma (Katey Sagal) had killed his wife Tara, he returned the favor and snuffed her out. Wayne Unser, likewise, met his demise.

But while fans of Juice are no doubt recovering from his death, Theo Rossi, the actor who portrayed him, isn’t complaining.

“I thought [that] to see him go out his own way was kind of cool,” Rossi told TheWrap on Tuesday. “To see him do his one last honorable thing to stop the madness, you know, it was nice to see.”

TheWrap spoke to Rossi about his character’s death, what that final bite of pie meant to him, and how it feels now that his ride has come to an end.

TheWrap: You almost made it to the end! Were you more surprised that you didn’t, or that you made it this far?
Theo Rossi: I’m never surprised by anything Kurt [Sutter, series creator] does. I stopped being surprised a long time ago, because he never does what you think. That’s kind of the genius of his writing. What I really love about this episode is that people have no idea what they’re about to watch. Every act of the episode is a huge happening, and it’s almost like you’re going, “We have another episode after this?” I’m not surprised, I’m grateful. Because ever since that confession in Episode 3 Season 4, finding out about Juice’s dad, it’s been a pretty downhill, rough road. You would think all the time that it would be lights out for him. And what an incredible array of emotions, not just for me, but for the audience to watch. It’s been a pretty incredible journey.

Last time we spoke, you said that you hoped that Juice would go out with some peace of mind. Do you think that was achieved with his death?
One hundred percent, definitely. I think when people get over the shock of it, it will be interpreted in a certain way, but I think that it’s the first choice he’s ever made, ever, in all this madness. It’s the first choice he’s ever made that’s his own. He made a choice: I’m just not going to do this anymore. I’m not going to go down this constant rabbit hole. Where does it end? You kill Tully, and then what? The white supremacists tell you to kill the Chinese, and then what? Then something heinous happens to him again. It would never stop. So for me, looking at Juice as a fan, it was peaceful, because it was on his terms.

Let’s talk about the previous episode, when Juice came clean to Jax about his part in covering up Gemma’s murder of Tara. What was that like to film?
I think that scene will inevitably go down as one of my favorite scenes ever, because it was nine minutes of just two people talking, with no barriers, no explosions, no nothing. Just two people talking and this beautiful dialogue. What I loved about it, and what I thought it did for Juice there, was, there’s no more, there’s nothing else. The lies — it’s all gonna stop. Because now there’s innocent people, truly innocent people [being hurt] — you know, Tara was innocent, Abel’s even more innocent. And now that everyone’s being affected — Bobby’s dead — and all this comes out … Juice has been manipulated six ways from Sunday, from everybody, from every time. Every single person has manipulated him from Season 4. That’s a very long time. I think he just had a clear conscience [after that scene]. And once you clear your conscience, and you see him at the beginning of this episode, and he gets more and more of him taken, another piece of him taken … it was time.

So basically he decided, “I’m out”?
And at the same time, not wanting to do it on his own, because who knows if he’ll bungle it again. He’s never been too great at things going the way he planned, ever. To me it was like this beautiful moment of, “Let me just finish my pie.” Which, god, you could talk for hours about what that pie represents. What it really represents to him is so crazy. But at the same time it was, “Let me just finish this. I’m cool; I don’t want anyone having any more problems; I sure don’t want to be the cause of the problem or the center of it. I’m exhausted, there’s nothing left to say, everyone knows everything. It’s over. That’s it. There’s nothing left to do.” And I thought to see him go out his own way was kind of cool. To see him do his one last honorable thing to stop the madness, you know, it was nice to see.

So how was the pie, anyway?
It was good! It was actually pretty good. It was one of the first episodes where I’m not completely naked, so I was actually able to eat pie. Because you’re basically eating air when you’re naked [onscreen] all the time. It was good; it was Whole Foods or Trader Joe’s, non-GMO-something cherry pie. And it was pretty good.

Did Kurt have a heart-to-heart with you beforehand about Juice’s death, or did you just come to a point in the script where you realized, “Oh, that’s it for me”?
Kurt and I have the greatest relationship, so I get always get my texts and my heads-up from him, and we talk about it and we go into our thing. Yeah, I knew — I did not know how until I read it. I had heard different things. And I was really, really, really happy when I read it. It was different than what I thought [would happen]. It could have been anything; I didn’t know how he was going to go out. I thought that every time he held that shiv up to his own neck, every time he looked at it, eventually he was going to try to take his own life again. So I felt like this was a surprise.

It was pretty natural that Jax would be the one to kill Gemma, but did any part of you ever wish it was Juice, given the tragic path she had sent you down?
I knew once he didn’t take her out in the episode earlier in the season, once she got away there, I knew that it was never gonna happen. I think Juice in his mind still thinks Gemma cared about him. I think he still thinks Clay cared about him. I think he thinks Jax cared about him. I think he’s the lost boy, the happy idiot who just didn’t understand that he was being completely manipulated at all times. I think he was so thrown off by the Gemma thing, and at the same time this guy has the most undying loyalty. I’ve never seen a character who keeps doing these things just to win acceptance. [Though] I’m sure that if you caught Juice in a specific rage, I’m sure he wanted to kill everybody.

Even though Juice, Gemma and Unser died in the penultimate episode, you mentioned that you were all on set for the shooting of the finale. What was the emotional vibe like?
Oh, man; massive emotions. We’re all so damned close. I’m in my house in New York and I talked to Unser and Tig this morning. It’s just the way it is; we still all talk and we still all hang out. Tig’s coming into town Sunday. So I think it hasn’t hit us. I don’t think it will hit us until like May, when it’s like, “Hey, we have the big FX party in Manhattan,” that’s usually March, and then we know in May that we’re going back to North Hollywood to shoot. And it’s like, “Oh, we’re not doing that.” That’s when I think it’ll really hit us, because right now, it feels like we’re on hiatus in a way.