On a soundstage on the Sony Pictures lot, a group of cinematographers sit and watch one of the most important scenes many of them will be involved with this year:

A USC acting student standing in front of a black backdrop, holding a yardstick.

That’s it – no action, unless you count the casually-dressed guy at the front of the room who announces, “We’re going 3D now, folks,” and then punches a button on the control panel he’s holding.

Sure enough, the scene suddenly acquires another dimension on a nearby monitor, the yardstick seeming to pop out of the screen toward the viewers.

This, essentially, is 3D School, a three-day course offered by Sony to directors of photography who want to learn the new technology. Sony started the program in early April, turning one of its soundstages into a hands-on classroom and setting up a separate 3D center in a nearby building. 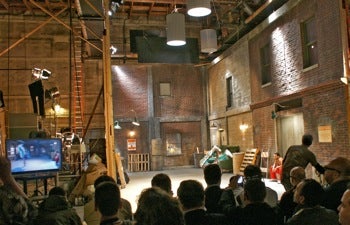 When the studio announced the classes and the International Cinematographers Guild made its members aware of them, 200 signed up in the first four days to learn a new set of skills.

“Shooting in 3D requires a real paradigm shift,” says Buzz Hays, the Executive Stereoscopic 3D Producer at Sony’s 3D Technology Center. “It’s not just a matter of taking what you do in 2D and using new equipment.”

He shrugs. “As Phil McNally at DreamWorks likes to say, we’ve spent the last hundred years trying to figure out how to convert 3D reality to 2D photography, and it’s become its own art form. But a lot of the 3D filmmaking we’ve done in the last few years has been a 3D version of that. We’re still using the mechanics of 2D storytelling, and there’s a better way.”

Instructor Dave Drzewiecki is showing that way on the Sony soundstage, which is equipped with an array of expensive 3D equipment and a pair of sets: the alley where Spider-Man kissed Mary Jane (photo above), and an apartment from the TV series “’Til Death.”

At the second of Sony’s classes, more than a dozen cinematographers and a handful of observers watch the demonstrations, follow the math behind the process (it turns out that “V=Mfc” is an important equation if you want to know where to sit in a 3D theater), and try their hand at filming.

The group is not restricted to Sony-affiliated filmmakers; in fact, says Hays, it’s drawn almost equally from all the studios. None have paid to attend, and the DPs who’ve come in from out of town are having their room and board paid by the ICG.

So what’s in it for Sony? In a way, says Chris Cookson, the studio’s president of technology, what they’re doing is similar to what Sony did many ago, when it gave classes to teach DPs how to use Sony’s new 24-frame electronic cameras.

“There was a realization that if Sony wants to promote 3D, bad 3D experiences are going to hurt Sony a lot,” Cookson says. “It doesn’t matter if it’s a Paramount movie or a football game that’s really terrible. If somebody watches it and gets uncomfortable, they’re not going to be interested in what we’re doing in 3D, whether it is equipment or TV sets or movies.”

Sony staffers approached the parent company in Japan, he says, for funding from Sony corporate “to create a center to teach how to use 3D effectively. It was funded as a Sony investment in the industry, with the belief that if people know how to make good 3D, that consumers ultimately will enjoy it. It’s one of those plant-a-seed things.” 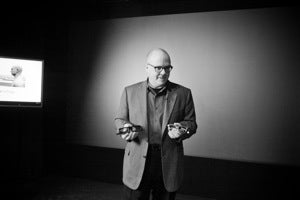 Adds Hays (left), “We’re not looking for any sort of tangible payback. It’ll come. If somebody shoots a film on a Sony camera or buys a Bravia some day, that’s validation.”

Early on, Sony turned to the International Cinematographers Guild – whose president, Steven Poster, says he’d been exploring the idea of 3D classes for about three years, only to be stymied by the expense and scarcity of camera equipment.

“Until Sony came along,” he said, “it was very elusive, and very difficult to put anything together.”

The key to the classes – which begin with one day of classroom lectures, then move to the soundstage for two days of hands-on trials – is to let filmmakers know the ins-and-outs of a medium that can be dazzling, but can also leave viewers in pain.

“There are techniques you can use where it looks fine for a few minutes,” says Hays, “but if you do it for 90 minutes you’ll give people a splitting headache.”

Even a simple scene around a table, he adds, could fall into that category. “Say we’re filming this conversation, and shooting it from different positions in traditional 2D style. If you’re not careful about making sure that you are the same distance from the camera as I am as we’re cutting, it makes your eyes work overtime, because we’re jumping in depth from cut to cut. That, for various reasons, can be tough to watch, and if you keep it up it’ll give you a headache and you won’t know why.”

Action scenes, particularly when they involve quick cuts, have their own set of rules: “You always hear this notion that you can’t cut quickly, which actually isn’t true. But you have to control what you’re cutting to and from. We have what we call the rule of three. Typically, if you’re working on a shot, you have to know what shot led into that shot, and which one you’re going to, for the 3D to make sense across the cuts.”

Of course, films that are filmed in 2D and then converted to 3D — the widely-derided conversion of "Clash of the Titans" being the most notorious example —  can’t follow these guidelines; the problem there, says Hays, is that haste can cause big problems.

"The whole conversion thing is tricky," he says.  "It’s possible to do it well, but you go back to the old adage: good, fast and cheap. You really do have to pick two, not one. And a lot of them seem to be picking one: ‘Oh, we did it really fast!’  Okay, but maybe you should have spent a little more time."

In class, though, the focus is on filming in 3D, not going there after-the-fact. Drzewiecki doesn’t simply spell out the guidelines – instead, things are structured so that the DPs can figure things out for themselves by working with the equipment.

“What we’re trying to do is set up situations where they can come to their own realizations of what works and what doesn’t work, instead of giving them a list of rules,” says Hays. “The whole idea is to give them their own aha moments, and I think that’s what they’re all getting.”

For cinematographer Poster, that’s exactly what he got when he took the first class.

“I thought that I knew about 3D, but over those three days I had a really profound change in my understanding,” says the ICG president, who took the course while he was involved in the 2D-to-3D conversion of a film he’d shot, Warner Bros.’ “Cats & Dogs.”

“It was like one minute I didn’t understand the language of the country I was in, and then all of a sudden a switch flipped and I understood. It’s not just a matter of learning the tools, but of understanding what 3D is.”

Poster says the ICG is now interested in creating some kind of traveling class, to take the concept on the road. “I’m completely convinced that we’re going to end up in a hybrid world of 3D and 2D,” he says, “Learning this new language is so important not just to our members, but to the industry at large.” 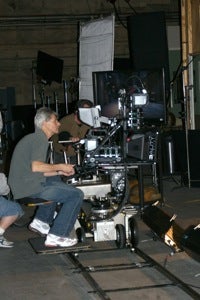 Back in the soundstage, Drzewiecki (left, with two Sony HDCams in a 3ality beamsplitter 3D rig) demonstrates how the 3D effect looks dramatically different from different points in a theater or viewing area: in general, sitting closer to the screen compresses the image, while sitting further back elongates it.

“The optimum is anywhere from one to three screen widths,” he says. “If it’s a 40-foot screen, don’t sit any closer than 40 feet.”

He talks about achieving something called “geometric congruency,” and about the tricky use of camera focal lengths, which can dramatically change the optimum viewing location. “In a normal movie or TV show, you might shoot using a wide range of focal lengths,” he says. “But in 3D filmmaking, maybe you don’t want to do that. If you keep your focal lengths within a moderate range, you’re going to find that you have a better handle on your geometry.”

The viewers sit on chairs or couches, taking notes, nodding and asking questions that tend toward the technical and, to a layman, impenetrable: “Are you adjusting the parallax before you go inter-ocular?”

Drzewiecki walks the DPs – and a few production executives who occupy each class’ “observer seats” – through the process, explaining intricacies and writing equations on a board. “What you need to understand,” he says, “is that everything is about perception. Everything is an illusion. Then you can go ahead and work in the medium.”

Sony’s classes were originally slated to end in May, but Hays says that demand has been so big, and reaction so positive, that they may well be extended into the summer. In addition, Sony has been bringing interested directors into its 3D Technology Center, showing them the ropes with an emphasis on post-production, particularly editing.

“Somebody asked me yesterday, ‘Do you think you can change Michael Bay’s mind about this?’” he says, laughing. “And I said, ‘Yes, absolutely. Send him over.’”

Bay has resisted pressure to make “Transformers 3” in 3D because, says Hays, “He feels that with his camera style that there may be some problems. Honestly, I don’t know what he knows about 3D, but I can guess that it’s not a lot.

“He talks like everybody else who doesn’t know a lot about it – and then once they start experimenting with it, they always have that aha moment.”

Or, as Steven Poster says, "Turns out you can teach an old dog new tricks."