Sophia Loren Breaks Down 8 Famous Looks: From ‘Cleopatra’ to Her Blonde Phase

TheWrap magazine: As her new film ”The Life Ahead“ plays on Netflix, the iconic actress reflects on her decades-long career

A version of this story about Sophia Loren and “The Life Ahead” first appeared in the Actors/Directors/Screenwriters issue of TheWrap’s awards magazine.

Sophia Loren may have spent most of the last decade away from acting, but that doesn’t mean she was planning to take a permanent break from the profession that made her an international star and the first person ever to win an acting Oscar for a performance not in English. (It happened for “Two Women,” in 1961.) “No, no, no!,” she said quickly when asked if she would have been satisfied in retirement. “Impossible for me not to do it again. Impossible, impossible. I hope I can do this until I die.”

At the age of 86, the Italian legend is indeed doing it in “The Life Ahead,” her son Edoardo Ponti’s adaptation of a Romain Gary novel about a former prostitute who cares for at-risk children. “She was tough, she was funny, she was also fragile, and in a way she reminded me of my mother,” Loren said of the character of Madame Rosa. “And I was missing my work when I read this beautiful story.”

She lavished praise on her co-star Ibrahima Gueye, a Senegalese boy with almost no acting experience. “Without knowing what it is to be an actor — what is the scene, what is the camera — he understood everything,” she said. And she complained about the scene in which Madame Rosa freezes in the rain on a rooftop, with Edoardo insisting that she not blink while the cameras rolled despite the water cascading onto her face. “I went home and I was mad at my son,” she said, laughing. “But it is beautiful to be directed by my son, because he knows me very, very well.”

She also said she grew melancholy when the shoot ended, because “The Life Ahead” had brought her back to the career that she’s always felt was her destiny. “Since I was born, I’ve wanted to be an actress,” she said. “I wanted to work, I wanted to be on the screen, I wanted to do wonderful things in my mind. Just listening to me, it was ridiculous at the time, but it was something I had inside.” She paused. “I think I’m stuck with acting forever.”

Loren herself wrote these captions for our look back at her remarkable career in pictures. 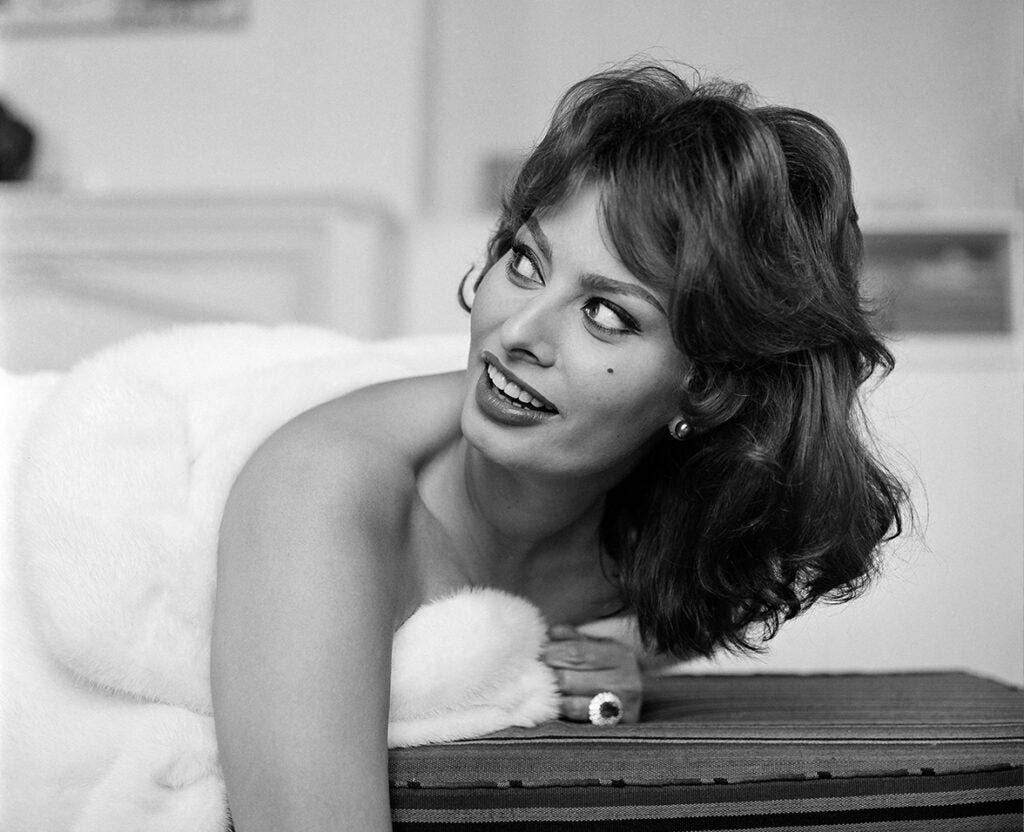 “That’s a photo taken during the period of ‘The Countess From Hong Kong,’ Charlie Chaplin’s last film. I was so nervous working with him, he’s such a master. But on the first day on the set I realized he was just as nervous. If you care and love something, you get nervous. I’m suspicious of people who don’t ever get nervous.” “I am not sure where this picture comes from. What I do notice is that I was smoking. Funny, when I see myself smoke, I don’t recognize myself. I stopped years ago, thank goodness!” 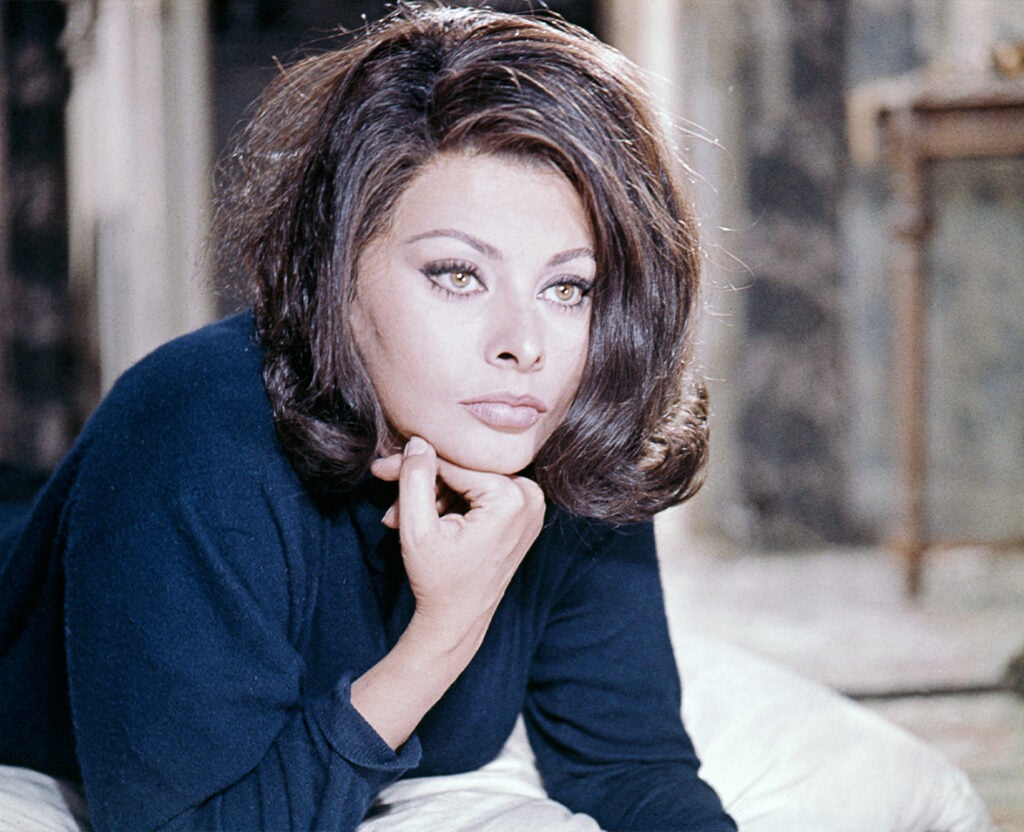 “This picture is from a film I did in London with Gregory Peck called ‘Arabesque.’ Gregory Peck was so wonderful and people don’t know how very funny he was. It was hard to keep a straight face when working together.” 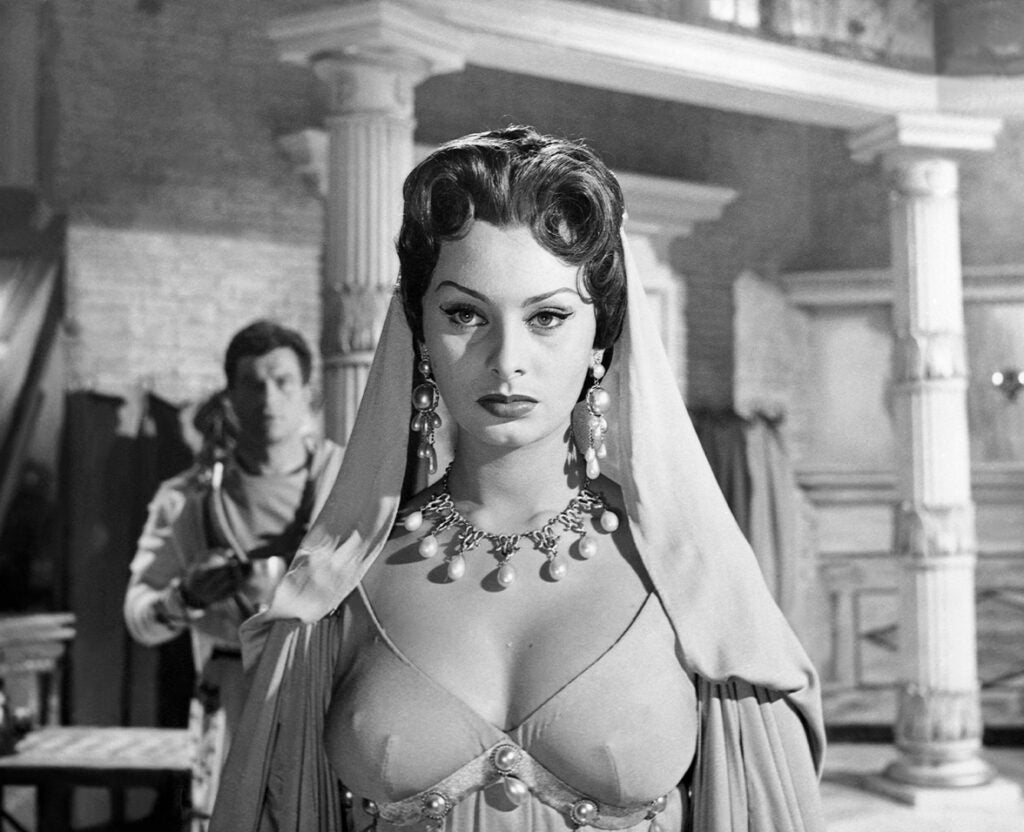 “This is taken from ‘Two Nights With Cleopatra,’ one of my very early films with Alberto Sordi. If you see the film now, you will realize that they had another actress dub my whole part in Italian because they felt I didn’t sound enough like Cleopatra, whatever that means. Coming from Naples, maybe they felt my accent wasn’t posh enough for their idea of Cleopatra.” 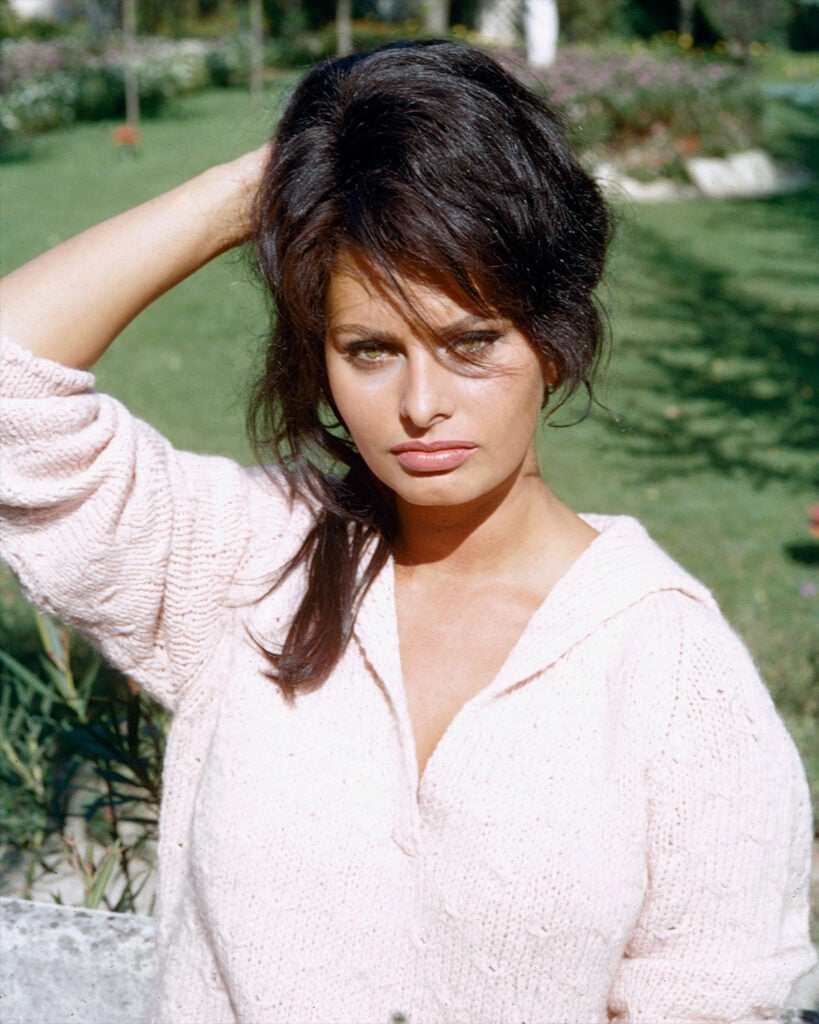 “This photo is taken in our home in Marino, outside of Rome. It holds a special place in my heart as it was the very first house that my husband (Carlo Ponti) turned into a family home.” 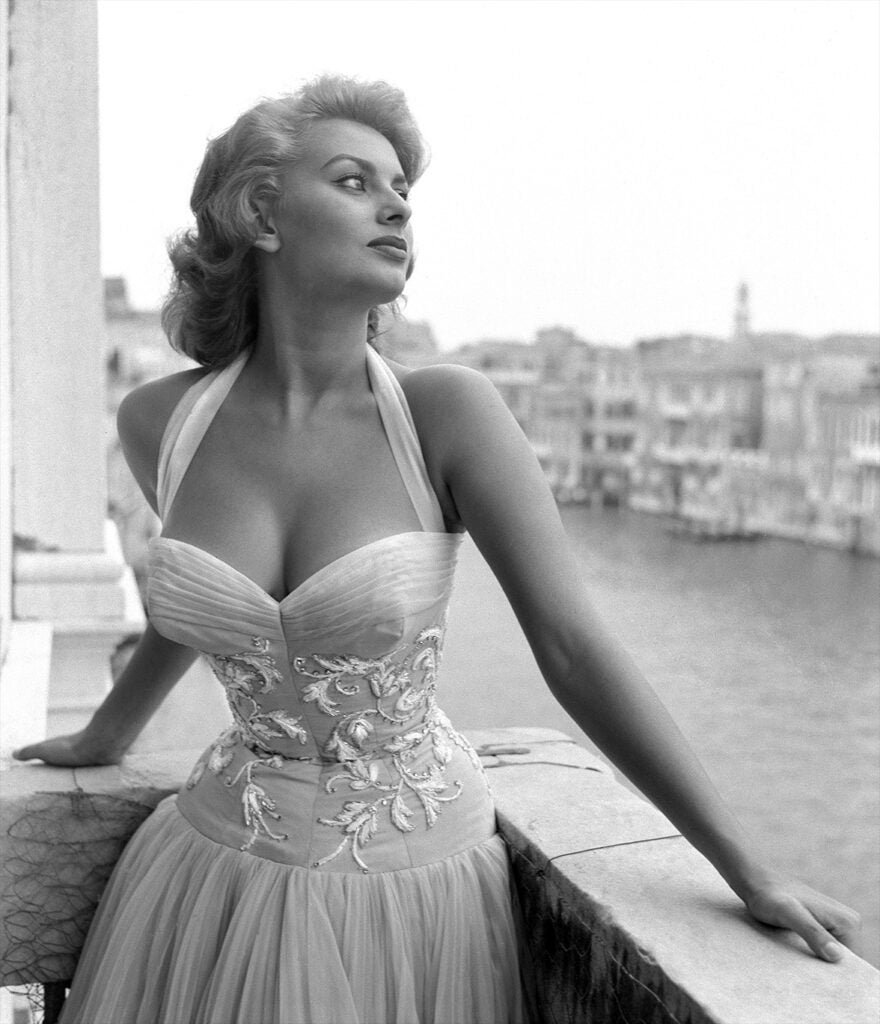 “I was very young here. I look so tense. One of my first times in Venice. This was a photo shoot for an Italian magazine. Still pretending to be a blond. Still trying to fit in….” 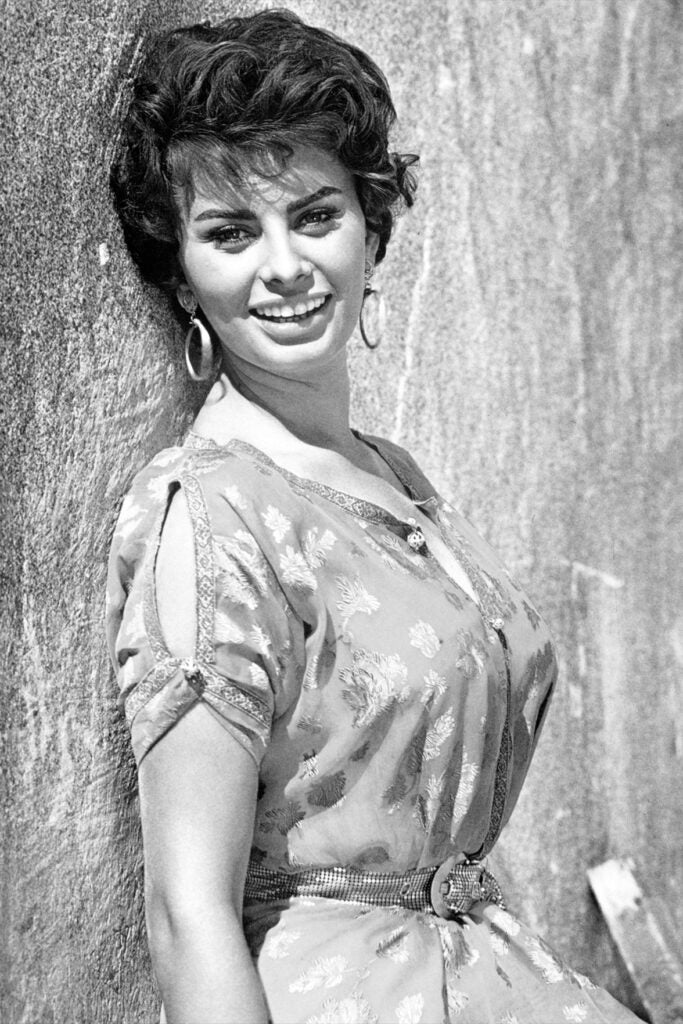 “I was working with John Wayne on ‘Legend of the Lost.’ One of my first English-speaking roles. My English was not great, the crew would sometimes make fun of me, but John Wayne always would stick up for me.” 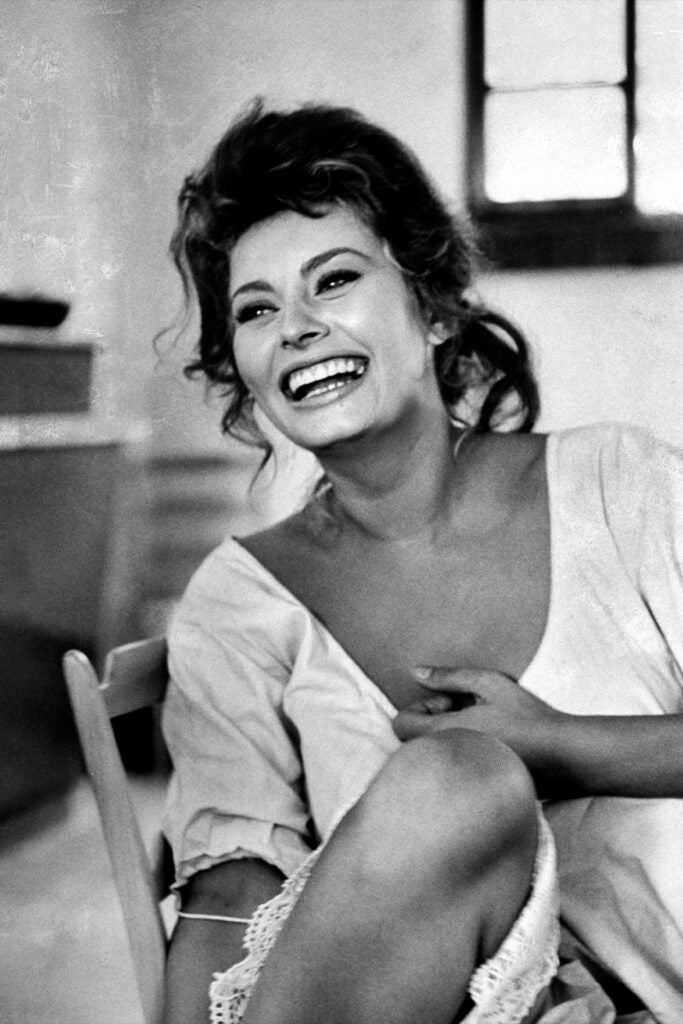 “This photo is taken from a film called ‘Madame Sans-Gêne.’ The picture is much more famous than the film, unfortunately. It’s a pity, I liked the film.”