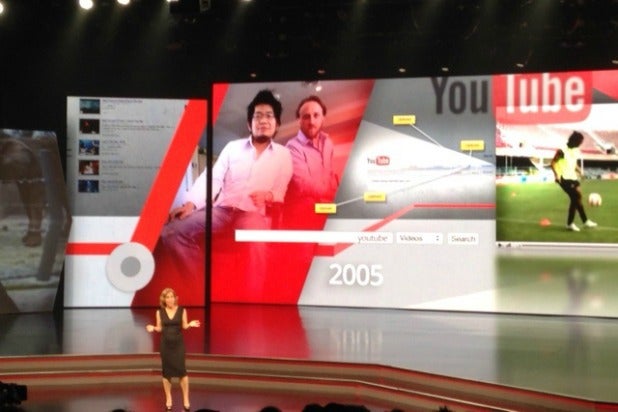 Sorry, Wikipedia: YouTube says it is the world’s new encyclopedia.

YouTube CEO Susan Wojcicki went before advertisers Wednesday to offer them the chance to buy ads during the site’s most desirable videos. It’s an initiative called Google Preferred.

Obviously nothing so stale as actual encyclopedias could serve as encyclopedias. But technophobes just starting to accept the notion that the world’s knowledge is moving to online text got a painful message Wednesday: It’s all about video now.

Of course, the source was somewhat biased: Wojcicki made the argument while trying to sell millions of dollars in advertising.

Wojcicki, whose parents are professors, said they used to tell her that if she wanted to know something, she should look it up in the encyclopedia.

“I realize that if people want to learn about the world today… they should look it up on YouTube,” she said in the company’s “Brandcast” presentation at the Theater at Madison Square Garden.

But YouTube has a mercantile component that encyclopedias — and Wikipedia — don’t: Wojcicki said three of the top 10 trending videos last year were commercials.

She used that fact to pitch Google Preferred, which allows advertisers to buy ads on the site’s most popular videos, gauge audience interest in what they’re selling and track engagement. She also offered advertisers access to Google Preferred shows “while they’re still available.”

Wojcicki noted that her son used YouTube to research the new “Call of Duty” game — and learns about world affairs from Vice Media videos.

She said users — especially those 18 to 34 — want to know about everything from hairstyles to cooking tips to news. She said YouTube creators, such as the cooking channel Tastemade, respond to user feedback immediately and incorporate it into their videos.

When she meets users, she said, they don’t want to know about her.

“They just want to know, can I connect them to their favorite creator?” said Wojcicki (pictured above, looking very small against the screen).

The pitch to advertisers featured YouTube personalities like Bethany Mota, who started posting YouTube videos to deal with cyberbullying and now has her own fashion line, and FoodTube host Jamie Oliver — who said YouTube can be a source of real information, not just entertainment.

And Vice CEO Shane Smith talked about how his company started as a Canadian punk magazine, and has since evolved into a global video empire. He said it took years for the magazine to reach one million magazine readers, but that once it went digital, it gained an audience of hundreds of millions.

He said his company has 7 million YouTube subscribers and has had a billion views.

Smith also said that thanks to the scale and platform it receives from YouTube, Vice will be “ten times the new CNN.”

YouTube also announced its first partnership with a marketing agency, DigitasLBi, which said it would take part in Google Preferred.

The presentation ended with a surprise performance by Pharrell Williams, who sang his hit “Happy.” He said it couldn’t get airplay — until he made a video.