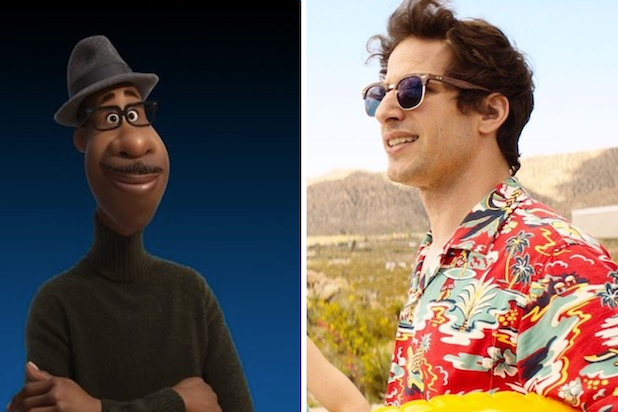 “Palm Springs,” “Soul” and “Da 5 Bloods” were among the top winners at Sunday night’s Critics Choice Super Awards, a curious awards show that was launched during a year in which the kind of movies it exists to celebrate were largely absent from screens.

The awards were created by the Critics Choice Association to honor action, horror, sci-fi, superhero, comic-book and animated movies — the commercial genres whose films were largely taken off the release schedule when COVID-19 restrictions caused the closure of movie theaters. As a result, the Best Action Movie category was won by Spike Lee’s “Da 5 Bloods,” in which the action sequences are peripheral at best; and the Best Science Fiction/Fantasy Movie award went to “Palm Springs,” a “Groundhog Day”-style comedy whose time-loop premise was enough to qualify it in the category.

“Palm Springs” and “Soul” each won three awards to lead all films, with “Birds of Prey,” “Da 5 Bloods” and “The Invisible Man” winning two each. Acting awards went to Delroy Lindo for “Da 5 Bloods,” Ewan McGregor and Margot Robbie for “Birds of Prey,” Vince Vaughn for “Freaky,” Elisabeth Moss for “The Invisible Man,” Andy Samberg and Cristin Milioti for “Palm Springs,” Jim Carrey for “Sonic the Hedgehog,” Betty Gilpin for “The Hunt” and voice actors Jamie Foxx and Tina Fey for “Soul.”

In the television categories, where the field of contenders was not as limited as it was in film, the big winner was the Amazon series “The Boys,” which won four awards, including Best Superhero Series. “Vikings” won for Best Action Series, “Lovecraft Country” for Best Horror Series, “The Mandalorian” for Best Science Fiction/Fantasy Series and “BoJack Horseman” for Best Animated Series.

Over the film and television categories, Netflix won five awards and Amazon, Disney+ and Universal won four each.

Kevin Smith and Dani Fernandez hosted the virtual ceremony, which was aired on The CW.