The combination of LeBron James, the Looney Tunes and references to Warner Bros.’ entire IP catalog was enough to give the studio both the best post-pandemic opening for any family film and the strongest opening weekend for a Warner release since the $31.6 million Friday-Sunday start of “Godzilla vs. Kong” back in early April. In fact, this opening total tops the entire theatrical run of “In the Heights,” which has grossed $29 million through six weekends in theaters. All Warner Bros. films have also been released simultaneously on HBO Max at no extra charge.

Critics have rejected the sequel with a 31% Rotten Tomatoes score, but audiences have embraced it with an A- on CinemaScore along with a 3.5/5 rating on Postrak. CinemaScore demographics showed 72% of the audience is below the age of 35 but only 32% is below the age of 18, showing strong turnout from single millennials and older Gen Z audiences that supported family turnout.

That millennial turnout is also a likely factor in “Black Widow” taking a 67% drop from its $80 million opening weekend, though it still sports a $131 million 10-day domestic total and $264 million worldwide. Disney did not disclose revenue from paid streaming sales on Disney+ after doing so last weekend, and it remains to be seen whether the studio will do so when “Jungle Cruise” is released in theaters and premium on-demand next weekend. 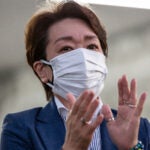 Also opening is Sony’s “Escape Room: Tournament of Champions” with $8.4 million from 2,815 locations. Produced on a $15 million budget, the horror film has met pre-weekend projections but is opening below the $18 million launch earned by the first “Escape Room” in January 2019.

Universal’s “F9” is in fourth with $7.6 million, making it the second film since the pandemic to gross $150 million domestically as its total grows to $154 million in North America and $591 million worldwide. Fellow Universal release “The Boss Baby: Family Business” completes the Top 5 with $4.7 million, giving it a total of $44.6 million after three weekends.