As anticipation for the long-awaited “Space Jam” follow-up rises before its July 16 premiere, the second trailer for “Space Jam: A New Legacy” raises the stakes of this face-off — LeBron James must win or else the Tune squad will be deleted.

The newest trailer gives viewers a sneak-peek into James’ preparation before this fateful game — as well as the Looney Tunes’ usual shenanigans. After being digitized and greeting Bugs Bunny with an enthusiastic hug, James teams up with the rest of the Tune Squad to form an elite team capable of winning Dom’s freedom.

As the pressure rises for James to reunite with this family by showing off his skills on the court, the villain announces that if James and the Tune Squad lose, the Looney Tunes will be deleted from the “Server-verse.”

Now that the Tune Squad’s future is in danger, the Looney Tunes put on their game face as they fight to win their own freedom  — complete with Wile E. Coyote entering a cloning machine and projecting multiple versions of himself onto the court.

Actress Zendaya will join James on the court as she voices Lola Bunny. “We’re the best teammates he’s ever had,” Lola says in a clip released on Twitter June 6. “You know, don’t love the sidekick label but we’ll let it go because it’s LeBron.”

Beyond LeBron and Zendaya, “Space Jam: A New Legacy” boasts a powerful roster — “Girls Trip” director Malcolm D. Lee is directing the film, and “Black Panther’s” Ryan Coogler is a producer. And you may find a few other current NBA and WNBA stars lurking in the film as well. 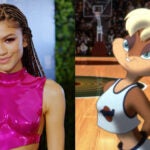 “Space Jam: A New Legacy” opens in theaters and on HBO Max July 16. Watch the second trailer above.