(Spoilers ahead for “Avengers: Endgame” — which presumably you’ve already seen if you’re reading articles about the new “Spider-Man: Far From Home” trailer which has these same spoilers in it)

So here we are. “Avengers: Endgame” is over, and Thanos has been dealt with and some of the longest-running heroes of the Marvel Cinematic Universe are dead, including Iron Man (Robert Downey Jr). And now it’s time to move on toward the next stage of the MCU, starting with “Spider-Man: Far From Home,” which got its second trailer on Monday.

This new trailer gives us some big details that the previous one held back because they’re related to “Endgame.” Those details specifically relate to Mysterio (Jake Gyllenhaal) and a quartet of monsters known in Marvel Comics lore as the Elementals.

In the trailer, Nick Fury (Samuel L Jackson) drops some big deets about Mysterio, claiming he’s from an alternate version of Earth, brought over because “the snap tore a hole in our dimension.” And then Peter Parker (Tom Holland) himself drops the M-word: multiverse. “Avengers: Endgame” introduced the multiverse without using that word — when the Avengers time traveled through they Quantum Realm they were actually traveling to alternate dimensions, not their own past.

Meanwhile, there is reason to think that the multiverse angle in this movie could be a load of crap — a con job by Mysterio. Or maybe it’s just not true for him, but it is true that the Elementals are from another dimension. It’s impossible to know until we see “Spider-Man: Far From Home” for ourselves, but for now let’s take a look at these characters in the comics so you can get to forming your own fan theories about how this situation will play out.

Several characters have operated as Mysterio, but the most famous one is Quentin Beck, Gyllenhaal’s character in “Far From Home.” Created by Stan Lee and Steve Ditko back 1964, Beck was a special effects technician and stunt man who dreamed of becoming a movie star in his own right. When that didn’t pan out, he realized his skillset could also be useful in a life of crime, so he created his trademark fishbowl-and-cape outfit and began pulling off robberies using tricks he used to deploy in Hollywood: literal (purple-green) smoke and mirrors, poison gasses, flashy tricks of light, that sort of thing.

Also Read: These Are the Time Travel Rules of 'Avengers: Endgame' 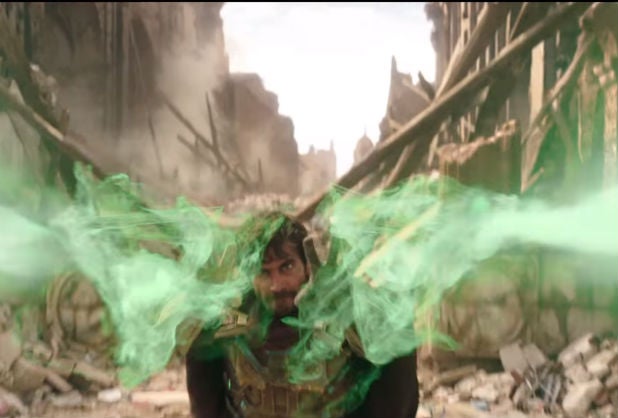 In his first battle with Spider-Man, he tried to frame the webslinger for robbing a museum, but was exposed and went to prison holding a serious grudge. Mysterio returned as a charter member of the supervillain team Sinister Six, and over the years attempted several revenge schemes against Spidey. He later also became an enemy of Daredevil (and was even involved in the chain of events that led to Karen Page’s death) until — and this is where it gets weird — he makes a deal with a demon, commits suicide and goes to hell, is sent back to earth from Hell, gets involved with a bunch of other crazy schemes, pretends to reform, and well, you get the idea.

Fun fact: Though he didn’t appear as Mysterio until 1964, it was later stated that a group of aliens Spider-Man fought in “Amazing Spider-Man” #2 were actually criminals in disguise, one of whom was Beck. Which technically makes him the third Spider-Man supervillain after the Vulture and Tinkerer, who also debuted in “Amazing Spider-Man” #2. Given that Vulture and the Tinkerer both appeared in “Spider-Man: Homecoming,” it looks like the Marvel Cinematic Universe version of Spider-Man is getting his original rogues gallery somewhat in the order he got them.

The main thing to know about Mysterio in the comics, though, is that he’s not some magical or cosmic being. He’s just a bitter guy nursing a serious inferiority complex, who never quite lives up to his ambitions in either legitimate or criminal enterprises, using tricks to seem more special than he really is. We’ll circle back to that in a moment.

The Elementals are more in line with the madness of the recent MCU. Their powers are real, and they’re insane. As you probably noticed in the “Far From Home” trailer.

Created by Tony Isabella and Val Mayerik in 1974, the group first appeared in Marvel’s anthology horror series “Supernatural Thrillers.” In the comics, they’re thousands-of-years-old evildoers from another dimension who became immortal after mastering the power of natural forces (hence their name). Their leader, Hellfire, controls fire, Magnum controls rocks and minerals, Hydron controls water, and Zephyr controls air. Once upon a time, the four of them ruled a kingdom on our Earth, but were deposed when they tried to conquer ancient-ancient-ancient Egypt, and were banished from this dimension. 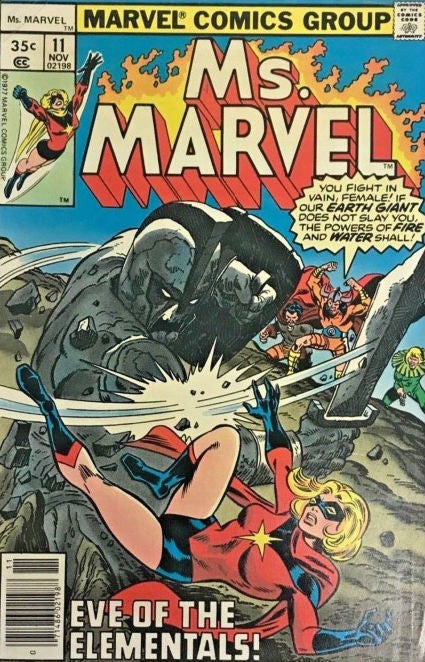 They managed to make it back to our realm in the modern era, where they had a few criminal adventures and tangled a few times with the original Ms. Marvel — that’s Carol Danvers by the way, AKA Captain Marvel, who starred in her own movie earlier this year.

Marvel hasn’t made much use of them since 1979 — their most recent appearance saw Zephyr team up with Thor for a completely bananas cosmic adventure that I won’t bother trying to describe here.

Given that Mysterio — who everyone knows is basically a con man using misdirection and special effects to commit crimes — is a big part of “Far From Home,” there’s two major possibilities for what the role of the Elementals is here. In both of these concepts, Mysterio is using them to try to pretend to be a hero.

The first idea is that the Elementals are themselves fake. Just more insane tricks by Mysterio, a switcheroo similar to what “Iron Man 3” did with the Mandarin. This plot would make “Spider-Man: Far From Home” a sort of fun little side adventure to allow audiences to relax a bit after the insane drama of “Avengers: Endgame,” akin to how Marvel used the “Ant-Man” movies after the last two “Avengers” flicks.

The second, and we would say more likely, possibility is that the Elementals represent an introduction to what’s in store in the next phase of the MCU. This whole thing has escalated dramatically from the fairly grounded first phase to operating on the cosmic scale of “Infinity War” and “Endgame,” and the natural next step would be to explore extradimensional stuff. We’ve already been getting teases over the last couple years, with Dormammu in “Doctor Strange” and the Quantum Realm in “Ant-Man and the Wasp.” And, as mentioned above, in “Endgame” itself.

It would make sense for the next phase to go in that direction, because just doing more space stuff in a post-Thanos MCU could easily feel like a retread. They’ve spent a lot of years getting us used to some pretty wacky things in the MCU, and so now would be the right time to go really deep into weirdest parts of the Marvel Comics universe.

But until we see “Spider-Man: Far From Home,” your guess is as good as ours.