The script for “Spider-Man: Homecoming” did not contain an LGBT teen character — but that’s what Sony and Marvel wound up with after nearly a year of casting Peter Parker’s classmates.

The same went for a diverse group of actors who rounded out the halls of the Queens high school where Tom Holland’s superhero anxiously spends his days before fighting crime in the streets.

“That’s what made this movie so good and and so cool, it’s inclusive,” actor J.J. Totah, who plays a student named Seymour, told TheWrap.

He’s a pal of Peter Parker and love interest Liz (Laura Harrier), and appears in a scene during gym class where Seymour and his girlfriends are playing a game of “Eff, Marry, Kill” regarding the Avengers.

Seymour and his friends decide they would sleep with Thor (Chris Hemsworth) and debate the merits of marrying Captain America (Chris Evans), all while sizing up Spider-Man.

“He could be burned really badly under that suit,” Seymour jokes, making a fantastic reference to the severely-scarred Ryan Reynolds hero Deapdool, who wears a costume very similar to Spider-Man’s.

Though the role is minor, it’s a stride to see a contemporary high school tableau where gay boys and straight girls congregate in P.E. to talk about their latest crush. It’s a modern depiction in a Hollywood landscape lousy at representing sexuality and race.

“The character was never decided to identify with a specific orientation — but I do think that after meeting with [director] Jon Watts a couple of times, when they offered me the part, they wanted me to bring myself into it,” Totah told TheWrap. 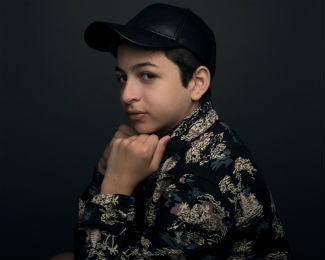 “That’s certainly what I did, and that’s what they did with some other kids. Like Abraham Attah, who came form Ghana, he was kind of playing a version of himself and representing his people,” he said.

GLAAD President Sarah Kate Ellis praised the inclusion, but said, “It’s disappointing that LGBTQ characters don’t make it to the big screen when the source material is rich with them,” as comic books certainly are these days.

“These films are viewed by millions both domestically and abroad, and seeing LGBTQ people represented is important, especially when we’re talking about heroes that youth look up to,” Ellis added.

Totah originally auditioned for the part of Ned, Peter Parker’s best friend and eventual crime-fighting sidekick. That part went to Jacob Batalon, but filmmakers from Marvel and Sony told Totah, “‘We want you here! We don’t know what you’re playing,” he said.

The 15-year-old, who had a memorable breakout in Chris Kelly’s “Other People” and will star as an out gay teen on Mindy Kaling’s upcoming pilot “Champions,” also enjoyed bringing LGBT representation to the genre.

“I wanted to bring another layer of the high school world. That’s representing not just a typical identifying male, but someone who is possibly more flamboyant and effeminate. He’s also fun, and a good time, and I like to feel I’m the same way,” he said.

“I don’t even like the word ‘feminine’ but i just have to use it for people to understand. We label stuff to cognitively understand things, but sometimes there’s too much labeling. We’re all just people,” he concluded.

“Champions” premieres this fall on NBC, and “Spider-Man: Homecoming” is currently in theaters.