The same weekend that director Manjari Makijany had wrapped up postproduction on a coming-of-age sports film, “Skater Girl,” she read the script for the upcoming Disney Channel original movie “Spin.” Soon after, she signed on as director of the project, the first in the channel’s history with an Indian American lead.

“Spin” follows Rhea (Avantika Vandanapu), an Indian American teen with a passion for music and DJing. When she meets a fellow aspiring DJ, Max (Michael Bishop), she delves deeper into her love for music — which she has long pushed aside, torn between it and the responsibilities she has to her tight-knit family and their Indian restaurant.

“The story was turning all the stereotypes on their heads, which is great,” Makijany said, “and it was also an opportunity to introduce Indian culture to mainstream audiences.”

The characters aren’t one-dimensional — Rhea isn’t just a smart Indian girl under the thumb of her strict father, but a kid who’s discovering and following her passion for the arts and trying to balance that with the love and respect that she has for her family. The collective identity that’s often intertwined with Indian culture blends with the individualism valued in American culture within the character of Rhea, as she holds the nuances of both cultures and parts of her identity.

Similarly, Makijany manifested Indian culture in every small detail she could and made sure that each department gave “the utmost importance to authenticity” to truly capture the Indian American, multigenerational experience: that included the vibrant fabrics that hang around the family’s Indian restaurant, the kurtas (loose, collarless shirts worn in South Asian cultures) worn by Rhea’s grandma, Asha (Meera Syal), and the furniture around the family’s house and restaurant — much of it was actually shipped in from India.

Makijany said the casting was “global,” too. While Vandanapu is American-born, Syal is from the U.K. and Bishop hails from Australia. “Oftentimes, we’re really stereotyped, and so it was important to open up casting so we have Abhay Deol (who plays Rhea’s father, Arvind) from India who’s actually playing the immigrant,” she said. “So we don’t have someone doing a phony accent, but someone who understands the experience.”

Despite the historic firsts in the project, Makijany downplayed any jitters. “I felt no pressure at all, I was so excited,” she said. “I was like, ‘Yup, I’m the one to tell this story and do this’ because I’ve been in the position of living in India and living here, and so I understand what the balance of both the worlds is.”

And she hopes that “Spin” will prove instructive for audiences of the Indian culture as well as those who aren’t. “I want audiences to be able to take a little bit of the Indian culture and spirit with them,” she said. “It’s inspiring to see an Indian American in the lead, so for all the people who didn’t have that growing up, I feel that now they have someone to look up to.” 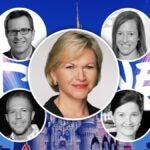 Also Read:
Inside Disney’s Search to Replace Zenia Mucha: Does a New Era Demand a New Kind of Communications Chief?