An Olive Garden commercial that devolves into “Eyes Wide Shut,” the film fluctuates between the two distinct modes of these tomes: the artificial, improbable fantasy of a vibrant European trip where all inhibitions are put on hold, and the fear-inducing suspicion that something perverse and worthy of uncovering might be unfolding right under the surface.

True to its title, Baena’s latest takes us through more than a few tonal twists and plot turns, even if they don’t always land smoothly or humorously, in its exploration of how fooling oneself into believing a fantastical fiction can provide dangerous respite from a bland, ordinary reality. 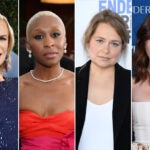 After nine years as a manager at the sleepy Bakersfield location of Tuscan Grove, a low-quality chain Italian restaurant, Amber (Alison Brie) has been selected for the trip of a lifetime, or so she thinks. A few days in an Italian villa to learn about the cuisine and culture of the country alongside other top-performing employees seems like a reinvigorating opportunity. But the veneer of magic wears off almost immediately after landing.

First, the promised Instagram-worthy accommodations are replaced with a disheveled hotel hued in drab, desaturated colors. Then there’s the collection of other odd guests that include overbearing, boundary-crossing Deb (an enjoyably deranged Molly Shannon), apprehensive Tuscan Grove diehard Dana (Zach Woods), as well as two other young women and a former cooking-show contestant with an enormous ego.

Following a string of useless culinary lessons, the group meets the boss and face of the company, Nick (Alessandro Nivola), who takes a liking to Amber. Though “Spin Me Round” deliberately avoids being a grand tour of Italy, and sightseeing is limited, Baena ensures Nick’s seduction tactics on a boat have a glossy, dreamlike atmosphere that’s no more authentic than the food served at his restaurants. She quickly convinces herself this is love at first ride. 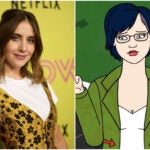 Baena also brings back his most recurrent accomplice — his wife Aubrey Plaza, who starred in the director’s “Life After Beth,” “Joshy” and “The Little Hours.” Plaza, who often improves whatever she is in by virtue of her darkly humorous presence, plays Kat, Nick’s closest associate in grooming other women, with her characteristically acid line delivery. A sequence where Amber and Kat go off on their own to have a reckless night is where the story rings more honestly spur-of-the-moment and more risky in how Brie’s character is confronted with inner conflict.

At first, Brie (also a co-writer here, as she was on Baena’s “Horse Girl”) imbues Amber with wide-eyed gullibility, making her susceptible to Nick’s advances. Everyone around her praises how open-minded she is, and though their compliments have ulterior motives, there’s truth to her willingness to go along for the ride under the impression that it will lead her to a torrid love affair.

But just as the film shifts from sun-dappled wonder to a mystery with hints of a human-trafficking operation, her demeanor changes from that of the bubbly title character in the Italy-set “The Lizzie McGuire Movie” to one of jaded distrust. Small factoids about her past sporadically come into the foreground, but none of them justify her propensity for being easily charmed, beyond the fact that she is a small-town woman blinded by a world outside her own. 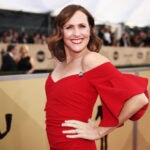 Brie’s somewhat grounded performance, in contrast with the more heightened acting around her, does a lot of the emotional heavy lifting throughout. The film’s strongest element is that defined character arc, which occurs amid the disarray and without much of a backstory. In turn, Nivola excels as a childishly manipulative womanizer with “cult-leader light” energy. He definitely has range, as an uncomfortably hilarious crying scene attests here.

Casting a wide casting net, Baena also folds in bit parts for name talent like Fred Armisen, Ego Nwodim and Lil Rel Howery. They’re responsible for most of the effective comedy, though in some cases with portrayals that border in “SNL”-style caricatures. While not always as funny as it wishes to be through the managerial team bickering dynamic, “Spin Me Round” is generally engaging thanks to the “what the hell is happening here?” doubt that Baena instills early.

An interesting comedic exercise, this is Baena’s least eccentric outing yet (considering there are no jealous zombies or foul-mouthed nuns), but it’s perhaps his most narratively ambitious, in terms of its genre playfulness and a clear objective of dismantling its protagonist’s false illusions. Both the score (by veteran composer Pino Donaggio) and Sean McElwee’s cinematography go along with variations in tone.

Just as the music goes from happy-go-lucky, jingle-like cheer to suspensefully ripe enough for a James Bond film, the lighting choices become more purposefully on the nose to reflect the terror Amber perceives all around her. There’s a thematic and practical synergy that’s far more impressive than some of the dry-humor gags that don’t amount to much.

“Spin Me Round” feels relevant to the common desire of wanting to experience events out of the ordinary to escape crushing mundanity, but it also holds Amber accountable for the castles in the sky she erected for her own sake. Perhaps her own desperation for something interesting to happen colored her experience, and the people on the other side of the equation weren’t as deceitful as she imagined.

“Spin Me Round” makes its world premiere at the 2022 SXSW Film Festival.