One of Hollywood’s iconic awards-season traditions – an afternoon spent celebrating small films on the beach in Santa Monica the day before the Oscars – is changing.

On Thursday morning, Film Independent announced a new date and time for the 25th installment of the Independent Spirit Awards. Rather than the usual location, a tent on Santa Monica Beach near the Shutters hotel, the awards will be held at the LA Live complex in downtown Los Angeles. And instead of taking place the afternoon before the Academy Awards, they’ll be handed out at 8 p.m. on Friday night, March 5, two days before the Academy Awards.

“We really felt that for the 25th anniversary, we wanted to try something different,” Film Independent’s executive director Dawn Hudson tells The Wrap. “And if you think about it, downtown is very fitting for the Spirit Awards, for independent film and for a big party.” 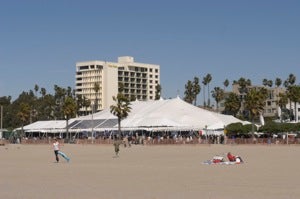 Hudson says that Film Independent scouted locations around Los Angeles looking for new venues, with the caveat that any site should be an unconventional awards-show location with enough room to accommodate at least as many guests as in years past. (When it was held in the tent, right, the show attracted about 1,500 guests, plus an additional 400 members of the media.)

“It’s a big anniversary for us, and we wanted to celebrate with the entire independent film community,” she says. “We certainly didn’t want to go to a smaller venue and exclude people.”

The Spirit Awards have been held at the beach every year since 1995. Prior to that, the show had a variety of venues, including the Hollywood Palladium, the Beverly Hills Hotel, Raleigh Studios and, in its earliest years, the 385 North restaurant.

By airing the show live on IFC, the Independent Film Channel, at 8 p.m. Pacific, 11 p.m. Eastern, Film Independent aims to capitalize on the Spirit Awards reputation as the looser, edgier awards show, the one whose hosts include Steve Coogan, Rainn Wilson and Sarah Silverman rather than Billy Crystal, Ellen DeGeneres and Whoopi Goldberg. (If the Oscars are, say, the Jay Leno of awards shows, the Indie Spirit Awards are the David Letterman or Craig Ferguson.)

“This is a late-night awards show,” Hudson says. “We want to start the party at a party hour, and we want you to be watching the Spirit Awards at 11 o’clock at night.”