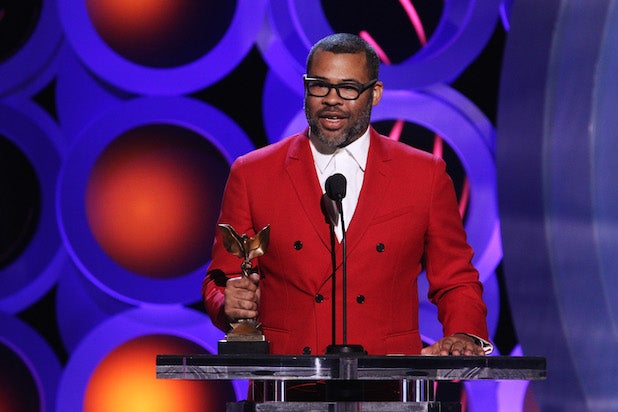 The 33rd Annual Film Independent Spirit Awards did everything they could to keep the Spirits/Oscars streak alive. Now it’s up to the Academy.

By giving the Best Feature award to Jordan Peele’s “Get Out” on Saturday, Spirit Awards voters handed their big prize to the Spirit nominee with the best chance of winning the Oscar for Best Picture on Sunday. If “Get Out” does so, it will extend a streak in which five of their last six winners, including the last four in a row, repeated at the Oscars the day after winning at the Spirits.

It’s hardly a sure thing — “Get Out” isn’t the Oscar favorite, facing strong competition from “The Shape of Water” and “Three Billboards Outside Ebbing, Missouri,” among others. Neither of those films were nominated for Best Feature at the  Spirit Awards, even though “Three Billboards” was nominated in other categories and “The Shape of Water” seems to have been eligible.

In winning Best Feature, “Get Out” topped two other Oscar Best Picture nominees, Greta Gerwig’s “Lady Bird” (which won for screenplay) and Luca Guadagnino’s “Call Me by Your Name” (which won for actor Timothee Chalamet and for cinematography). But it continued a definite pattern that has developed over the last decade at the Spirit Awards, whose voters are divided between indie-film professionals and fans who pay annual dues to Film Independent.

In recent years, voters have almost invariably gone for Oscar nominees over the smaller, truly indie movies that are selected by the Spirit Award nominating committees. If there’s one Oscar nominee in a category, that nominee will usually win; if there are a couple of nominees, the one with the best chance of winning the Oscar will win the Spirit Award.

And so it went on Saturday. Frances McDormand and Sam Rockwell won the Best Female Lead and Best Supporting Male awards for “Three Billboards,” just as they almost certainly will win the Oscars for Best Actress and Best Supporting Actress. Allison Janney of “I, Tonya” did the same in the Best Supporting Female category, where she’ll likely repeat on Sunday. And the one Spirit Awards acting winner who is apt not to repeat at the Oscars, “Call Me by Your Name” star Timothee Chalamet, is at least one of the nominees who will in all likelihood lose to Gary Oldman.

In other categories, “A Fantastic Woman,” one of the two Oscar nominees in the category, won the Spirit Award for foreign film. Oscar nominee “Faces Places” won in the documentary category. “I, Tonya” won for editing and “The Big Sick” for first screenplay, both categories in which they were the sole Oscar nominee.

But the most significant wins, Best Feature and Best Director, went to Peele and “Get Out,” didn’t sweep through the Spirit Awards categories quite as thoroughly as “Moonlight” did last year or “Silver Linings Playbook” did in 2012. Greta Gerwig’s upset screenplay win for “Lady Bird” made sure of that, along with losses for “Get Out” in the actor and editing categories.

Still, the Spirit Awards sent Peele to the Oscars on a mission that he might just accomplish: keep the streak alive.

Of course, when the “Get Out” filmmakers were asked if they were thinking about the Spirits/Oscars streak in the press room after the show, producer Jason Blum immediately made an elaborate show of shaking his head no.

“Not at all,” he said. “That’s the last thing we were thinking about.”

And then he started laughing.