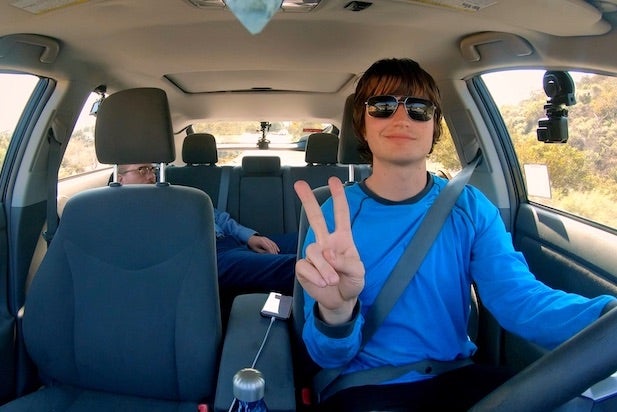 Pathetic meets psychotic in “Spree,” a black comedy that pretends it’s an assault on social media. But, instead, it is probably more interested in getting likes and follows by using that culture as a platform for some gleefully transgressive midnight-movie violence and bad taste.

Director Eugene Kotlyarenko’s film is a confounding combination of celebration and condemnation, notable mostly for its messy energy and for the commitment that “Stranger Things” star Joe Keery brings to his lead role as a guy who starts out as an annoying loser and goes downhill from there.

If you want to find social commentary in this satiric blast of cinematic hyperactivity, you certainly can, since the evils of social-media addiction are trumpeted with lots of gusto and not much nuance. And if you want to see people mauled by junkyard dogs for laughs, that’s there, too, in essentially the same radio of gusto to nuance.

The movie is kind of fun if low-budget horror appeals to you. And the way the film is shot — jumping from one small screen to another and piling different social-media windows in the frame so you can read comments as you watch the action — can be a sometimes dizzying kick. But it can also be exhausting, and it’s hard to shake the sense that Kotlyarenko doesn’t really have much to say amidst all this foolishness.

After premiering at Sundance in January, the film comes to theaters and VOD on Aug. 14. It’s safe to say that you can watch it on your TV or your tablet or your phone without losing (or gaining) much.

Keery plays Kurt, who always introduces himself as “Kurt, from ‘Kurt’s World'” and has spent the last decade trying to become the kind of social-media influencer who might occasionally be offered a free trip or a comped hotel room. “If you’re not documenting yourself, you don’t exist,” he declares — but if you are documenting yourself but you never even hit double digits in viewers, you get desperate.

And Kurt, make no mistake, is desperate. So he decides that he has to go viral by any means necessary, which is when he smoothly morphs from a pathetic loser to a psychopathic killer. If you can’t master the art of being a social-media whore, after all, you can always remake yourself as a social-media sideshow.

So Kurt, whose day job is as a driver for an Uber- or Lyft-like company called Spree, fills his car with cameras and bottles of complimentary water that have been poisoned. Maybe we’re supposed to be OK with it when he starts out by killing a smug white supremacist who calls him a “lib-tard,” but Kurt is pretty indiscriminate in his murdering — even if his crime spree is initially dismissed as “fake news” and he ends up moaning, “I got seven rideshare kills — why am I not trending?”

The pace is jittery and accelerated as the action jumps from screen to screen and this desperate wannabe influencer — Joaquin Phoenix’s Arthur Fleck or Robert DeNiro’s Rupert Pupkin with a better social-media game — encounters a motley crew of victims on a night-long trip around Los Angeles.

Mischa Barton and Frankie Grande show up as passengers, David Arquette as Kurt’s hapless DJ dad and Sasheer Zamata as a comedian who suddenly realizes that she doesn’t like being part of a culture where everything, including self-worth, is measured in followers and likes. The manic energy is appealing for a while, but at some point it gets wearying and the whole thing starts to feel a little aimless and, frankly, pretty stupid.

By the end, you can agree with some of the things the movie is saying — yes, some social-media influencers are awful people and nobody should ever aspire to be one — without finding anything particularly interesting in the gleefully ridiculous way they’re being said.