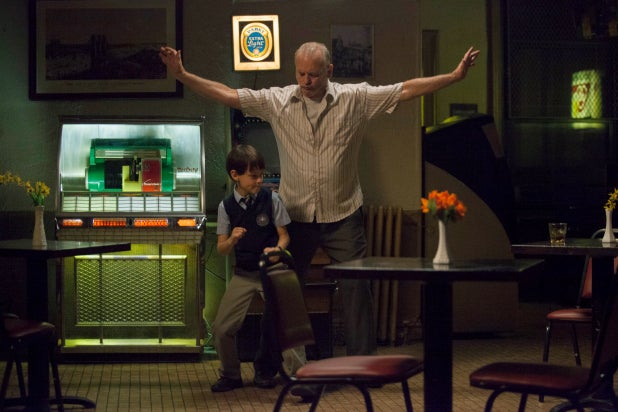 “St. Vincent” represents the kind of film that could simultaneously win Bill Murray an Oscar and leave an indelible black mark on his résumé.

It’s so thoroughly artificial that the Coke Zero you bought in the lobby will look like a shot of wheatgrass juice by comparison.

When it comes to feel-good clichés, “St. Vincent” has it all: an irascible old man with secrets, a needy and precocious kid, a hard-working single mom trying desperately to keep it together, a pregnant stripper with a heart of gold, a misunderstood bully who winds up becoming his victim’s best friend, a wry and twinkly priest, a tense and tear-jerking hospital montage, and a school pageant that brings all the characters together for one last gooey love-fest.

Substitute a pampered cat for the adorable mutt, and you’ve pretty much hit the boo-hoo trifecta, all supplemented with a manipulative and obvious score by Theodore Shapiro (“The Secret Life of Walter Mitty”).

Bill Murray, whose usually reliable b.s. meter seems to be on the fritz here, stars as Vincent, who lives in a ramshackle house, drives around a dying K-Car, owes money to his bookie (Terrence Howard), and pays Russian exotic dancer Duka (Naomi Watts) for a weekly sleep-over, even as she barrels into the third trimester.

Of course, as the title tips us off, Vincent may seem grouchy and irascible on the outside, but there are reasons behind his debt and his temper, ones intended to make him endearing and lovable, because heaven forbid a movie this sappy allow a character just to be grouchy and irascible.

Into Vincent’s life comes Oliver (Jaeden Lieberher), whose mother Maggie (Melissa McCarthy) has just left the boy’s father over his multiple infidelities. Because her schedule as a CAT-scan nurse is so unwieldy and unpredictable, she winds up paying Vincent to mind her child, never mind that he lives in a rathole, constantly demands money from her for damage to his fence, and generally comes off like the kind of guy you wouldn’t entrust to feed your gerbil.

Predictably, the preternaturally precocious Oliver and the world-weary Vincent start bonding, and then it’s just one life lesson after another. So much learning, and caring, and crying, and – in the audience – rolling of eyes.

Writer-director Theodore Melfi, who should be ashamed of himself, pours on the cute with such a heavy hand that the entire production is drowning in winsome. Murray gets lots of Oscar-clip moments, but they, along with the rest of his performance, strain credulity. These actors have been handed a big bag of tics and triumphs, but as characters, they never come off as organic or lived-in.

“St. Vincent” feels like one big calculated awards grab from start to finish – should it turn out to be a successful one, there can be no more damning evidence against the Hollywood Prize Machine that infects our theaters every fall and winter.