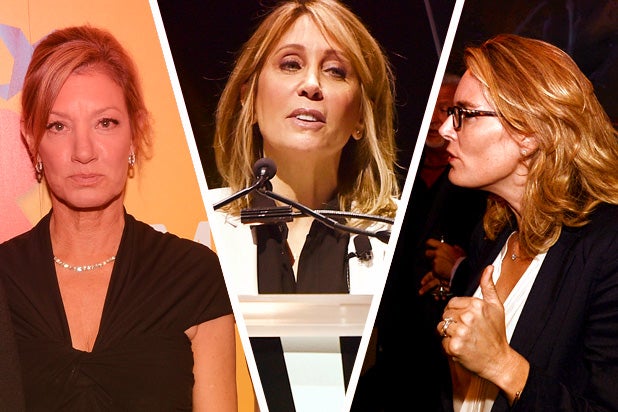 As the dust settles on Stacey Snider‘s appointment to the top job at 20th Century Fox, her future success may ride on working relationships with two other powerful women at the studio, numerous industry insiders told TheWrap.

Snider will succeed chairman and CEO Jim Gianopulos when his deal expires in 2017, and industry chatter immediately focused on the power dynamics between Snider, President of Production Emma Watts and Fox 2000 President Elizabeth Gabler.

All three are powerful, opinionated creative executives, and the way they interact is likely to differ greatly from the current vibe under the more patriarchal Gianopulos. Several veteran industry observers said that the styles of the three women may collide.

“I don’t see the three of them coexisting in 2017 — it’s tough,” said a veteran movie producer who knows all three well, speaking on condition of anonymity. “They’re very strong personalities, and in different ways.”

Another leading industry executive said he predicted tension among the three women.

Observed a third executive: “It’s definitely explosive. The word on the street is, ‘What is happening right now? How is this going to work?”

Watts, a hard-driving and often chilly presence, has been president of production at 20th Century Fox since 2009. Her greatest hits include the relaunch of the “X-Men” franchise with director Bryan Singer, getting the dystopian YA franchise “Maze Runner” off the ground and personally courting David Fincher to direct “Gone Girl,” a sensation adapted from Gillian Flynn‘s best-seller.

Gabler, known as a passionate advocate for sometimes unlikely projects, heads the specialty division Fox 2000, which struck gold in 2014 with an adaptation of John Green‘s novel “The Fault in Our Stars” and released the most recent David O. Russell-Jennifer Lawrence collaboration “Joy.”

Along the byways of Pico Boulevard, Watts is sometimes known to be “very abrasive,” according to a top talent exec, who used other terms that were even stronger but less polite.

Snider has the opposite reputation, a “warmer heart, who is certainly more user friendly,” he added.

Snider is a savvy political player, with a warm bedside manner that can mask a sometimes ruthless ability to leverage one interest against another.

Representatives for Fox did not return requests for comment.

If Gabler or Watts had issues with Snider since she joined Fox from DreamWorks in 2014, they’ve certainly had time to reconcile them or at least adjust to her presumptive promotion last week. She has been a fixture at Gianopulos’ side ever since her arrival.

At industry events as recently as April’s CinemaCon, two podiums stood side by side as Snider and Gianopulos jointly announced production on a sequel to the triumphant “Deadpool,” Ryan Reynolds‘ snarky superhero film that has earned nearly $800 million worldwide.

When word spread last Thursday of the succession plan, some insiders criticized Snider for a lack of creative identity in her role as studio co-chairman after nearly two years in her current post. But others point to her long resume, including her co-chairman title at DreamWorks, and chairman role at Universal from 1999 to 2006.

“Even though she hasn’t done a ton recently, she’s been doing this for many, many years,” the veteran producer said. “I wouldn’t assume a big knee-jerk [reaction] here. She’ll take significant time to figure out a peaceful and productive coexistence, but I don’t know if Emma will come around.”

Watts’ contract expires in 2019. The pair will have to work together to ensure continued success — while Fox is second in market share at the box office so far this yearwith 17.7 percent (behind Disney), 2016 is not without its speed bumps.

‘X-Men: Apocalypse” performed beneath expectations, and at roughly $85 million below its predecessor “Days of Future Past” in the U.S.

Roland Emmerich‘s mega-budget tentpole “Independence Day: Resurgence,” arriving 20 years after the original, is projected to open this weekend just under $50 million. The R-rated comedy “Mike and Dave Need Wedding Dates” starring Anna Kendrick and Zac Efron should be a draw, as should family fare “Ice Age: Collision Course” in July and “Trolls” in November.

There could also be upsides to harmony among an all-female team of top executives: They might be more likely to hire women behind the camera. At present, the studio does not have a single female director on its slate through 2020.

“Fox instigated this change, and now they’ll have to wait it out,” the producer said. “But this is Stacey’s job now.”