Star Jones is returning to “The View” and she isn’t the only one.

When the ABC daytime talk show returns for its 25th season next week, the show will introduce a series of weekly “Flashback Friday” episodes welcoming back former co-hosts, with Jones returning to the roundtable as a guest co-host on Friday, Sept. 10.

Jones was among the original cast of “The View,” co-hosting alongside Meredith Vieira, Debbie Matenopoulos, Joy Behar and moderator Barbara Walters during the show’s first season in 1997. She stayed with the program through Season 9, departing in 2006.

ABC has not yet announced which other past hosts will return to the show, but the list of past “View” hosts also includes Lisa Ling, Rosie O’Donnell, Rosie Perez, Raven-Symone, Michelle Collins and Candace Cameron Bure, among others. Whoopi Goldberg, Joy Behar, Sunny Hostin and Sarah Haines serve as permanent co-hosts on the show for Season 25, with Ana Navarro recurring. 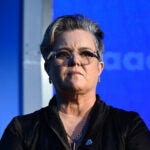 Season 25 will also mark the first time “The View” will return to its New York City studio since the onset of the coronavirus pandemic last year. “The View” is executive produced by Brian Teta and has been directed by Sarah de la O for the past six seasons.