Nickelodeon and Paramount+ released the first full-length trailer for “Star Trek: Prodigy” on Wednesday, marking the return of Kate Mulgrew as Captain Janeway.

The trailer was shared during the “Star Trek Day” livestream along with a panel featuring series voice cast members Brett Gray and Dee Bradley Baker, executive producers Kevin and Dan Hageman, as well as director and co-executive producer Ben Hibon.

The first “Star Trek” series aimed at younger audiences, “Prodigy” centers on a motley crew of young aliens who must figure out how to work together while navigating a greater galaxy, in search for a better future. Per the series description, “These six young outcasts know nothing about the ship they have commandeered – a first in the history of the Star Trek franchise – but over the course of their adventures together, they will each be introduced to Starfleet and the ideals it represents.” 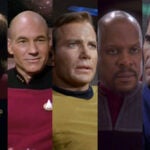 “Prodigy,” set to premiere on Oct. 28, will live on Paramount+ alongside the rest of the “Star Trek” franchise, including “Discovery,” “Lower Decks,” “Picard” and “Strange New Worlds.”