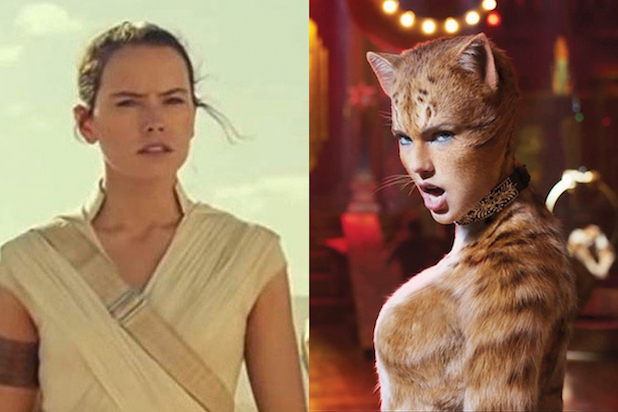 After Sam Mendes’ “1917” screened for the first time late last month, there was a feeling among Oscar watchers that we’d seen the last serious contender for this year’s big awards. Still, two big question marks hung in the air, because we’d seen everything … except “Star Wars: The Rise of Skywalker” and “Cats.”

On the surface, you had to figure that those weren’t really serious Best Picture contenders. The final “Star Wars” had to be a big popcorn movie for the fans, right? As for “Cats” … well, after that mind-boggling first trailer dropped back in July, you kinda figured its best shot might be at the Razzies, didn’t you?

And now we all know for sure. Both films premiered on Monday and had multiple press screenings on Tuesday — and now that the dust has cleared and the embargoes have lifted, it’s safe to report that “1917”  indeed was the last serious awards contender of the year.

It’s not that “The Rise of Skywalker” and “Cats” are terrible movies — though I’d suggest that one of them definitely is — but with a few exceptions, they’re irrelevant to this awards season.

Those exceptions all involve “The Rise of Skywalker.” As a film, as Alonso Duralde pointed out in his review on TheWrap, J.J. Abrams’ conclusion to the triple trilogy that began in 1977 is intermittently satisfying even as it tries too hard to give every “Star Wars” fan a warm fuzzy feeling. But John Williams’ music is stirring even if he turns to old standbys “The Imperial March” and “Princess Leia’s Theme” to do lots of the heavy lifting emotionally — and with nominations for the last two “Star Wars” movies and a spot on the shortlist for this one, the maestro is a good bet to land his 53rd nomination.

And in the sound and visual effects categories, which have been the likeliest places for these films to be nominated in this century, “The Rise of Skywalker” is still formidable. The visual effects are particularly spectacular, with a lightsaber battle in the midst of a raging sea giving us something we really haven’t seen before in this long saga.

The original 1977 “Star Wars” landed 10 nominations, including Best Picture and Best Supporting Actor (Alec Guinness), but none of the seven films between that and “The Rise of Skywalker” received more than five, and none were recognized for picture, director or acting. Despite the sentiment that comes from a storied saga coming to an end (except for, you know, all those standalone movies and Disney+ spinoffs undoubtedly in the works), this one seems likely to meet with a similar reception — which means that while voters in the music, sound, visual effects, production design and makeup branches might want to take a look, Best Picture voters don’t need to rush to see it.

And then there’s “Cats,” director Tom Hooper’s gloriously stupefying adaptation of the Andrew Lloyd Webber stage musical that managed to become a giant hit on the strength of a bizarre premise, some energetic dancing and one good song.

I know two people who say they love the movie, but one of them loves everything so he doesn’t count. TheWrap’s Robert Abele called it “a garish hairball,” which seems about right; to me, it was pretty much two hours of WTF.

And about an hour of feeling sorry for Judi Dench and Ian McKellen, who have the benefit of not appearing until about the halfway point.

As for its awards chances … well, the AMPAS Music Branch already killed the film’s best shot at a nomination by leaving its one new song, the Lloyd Webber/Taylor Swift collaboration “Beautiful Ghosts,” off the Best Original Song shortlist, perhaps because the clip they received didn’t have finished CGI. (Or perhaps because they just didn’t like it.)

It remains on the visual effects shortlist, where it’s probably a longshot next to the likes of “The Lion King,” “Avengers: Endgame” and “The Rise of Skywalker.”

Beyond that, the Music Branch likes to nominate musicals in the Best Sound Mixing category, but I have a hard time believing they’ll embrace this particular musical. Really, I suspect the trailer was right all along in suggesting that this one is Razzie-bound.