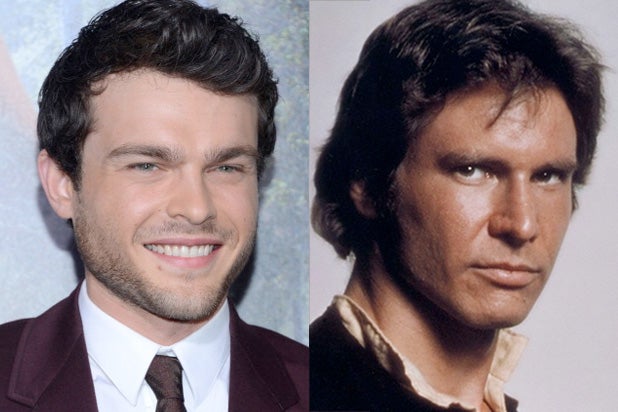 Alden Ehrenreich came out on the big stage at the Star Wars Celebration convention in London Sunday to stake his official claim on an important part of the “Star Wars” franchise — taking on the role of Han Solo himself.

TheWrap reported on May 5 that Ehrenreich, who made a big splash earlier this year in the Coen Bros. comedy “Hail Caesar,” was in final negotiations for the role. But Disney and LucasFilm waited until Celebration, the single largest “Star Wars” event of the year outside of the upcoming release of “Rogue One: A Star Wars Story” in December, to make an official announcement.

Ehrenreich will be the only actor to play Han Solo in a live-action “Star Wars” movie aside from Harrison Ford, who originated the part in 1977 in the original “Star Wars” film. The young Han Solo spinoff movie will take place before that film. It’s being directed by the “Lego Movie” and “Jump Street” tandem Phil Lord and Chris Miller.

Also Read: Who Is Alden Ehrenreich? 6 Things to Know About the New Han Solo

Ehrenreich was trotted out during the Future Filmmakers panel, the final panel of the convention before the closing ceremony. That panel, which was the only major one not streamed live from the “Star Wars” YouTube account, also saw director Rian Johnson discuss the upcoming “Episode VIII.” Though many fans hoped “Episode VIII” would receive its full title during the panel, that announcement never came.

Aside from “Hail Caesar,” Ehrenreich also has had notable roles in Woody Allen‘s “Blue Jasmine” and Park Chan-Wook‘s “Stoker,” as well as the adaptation of the fantasy young adult novel “Beautiful Creatures.” He’ll also appear in Warren Beatty‘s “Rules Don’t Apply,” out in November.

The Future Filmmakers panel at Celebration did provide one other bit of info about the young Han Solo movie: that Han Solo’s best friend and partner, the wookiee Chewbacca, will of course also be in it. But, like the Ehrenreich casting announcement, Chewbacca’s involvement in the film is not exactly shocking.

The young Han Solo film will be the second of the “Star Wars Story” movies after this year’s “Rogue One,” which will kick off the trend of one numbered saga movie every other year and one spinoff each year in between.

You can expect the young Han Solo movie in 2018.

'Rogue One: A Star Wars Story': Everything We Know So Far (Photos)

We already have a pretty good look at the big picture, thanks in part to Friday’s presentation at Star Wars Celebration

As we bask in the glow of new footage for "Rogue One" from Star Wars Celebration Europe, it can be easy to lose track of the big picture. So let's take a step back and rundown the basics of what we know of the standalone flick from director Gareth Edwards.