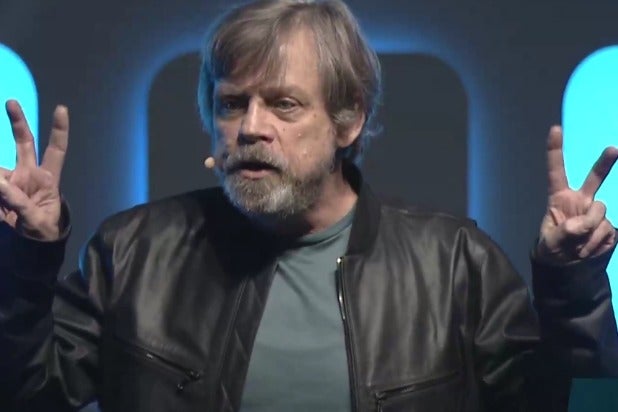 Even those inside the veil of secrecy can find the draconian measures Disney takes to prevent “Star Wars” leaks irritating.

“It can be annoying and intrusive,” said Mark Hamill, who plays Luke Skywalker in both the original trilogy and the new one, on stage Friday at Star Wars Celebration. “You get call sheets, there’s no names, everybody’s got a number! You’re number 11. You’re 33. You’re looking at the call sheets wondering who’s working today, and it’s like oh I loved 22’s work. She’s twice as good as 11.”

The “Star Wars” movie franchise is no stranger to secrecy — production on “Return of the Jedi” in the early 1980s was carried out under the title “Blue Harvest,” for example — but it has really ramped up in the Disney era, as the company tries to keep plot details on lockdown ahead of the release of each film.

Not that they can ever be entirely successful, with productions involving huge numbers of people and “Star Wars” fans being as obsessive as they come.

Even so, Disney was largely able to prevent spoilers from circulating too much prior to the release of “Star Wars: The Force Awakens,” and the company seems to be continuing to use any and all methods at its disposal to keep much info about the upcoming spinoff movie “Rogue One: A Star Wars Story” or “Episode VIII,” in which Hamill will appear, from leaking.

Hamill joked that a lot of his struggle with all the secrecy rules came from the fact that he’s gotten old (he’s 64 years old) and needs to be able to annotate his screenplays in order to keep track of what he’s supposed to say.

“I understand why they’re doing it, but it can get really out of control with the pages that get shredded every day,” he said.

“I’m in the elderly recluse stage of my career, I have to write cartoons in the margins to make me remember these lines. I need a script you can write on and take home and look and read! So they let me have one scene, and I keep it on my person.”

Ultimately, though, he said it’s all about preserving as fresh a viewing experience for fans as possible.

Also Read: Who's Who in 'Rogue One: A Star Wars Story' (Photos)

“They’re not doing it to annoy you, it’s just that they want the surprise to be in the movie theaters, not the Internet,” he explained.